LONDON, England (CNN) -- In the coming years we face an unprecedented challenge -- to provide the means for global prosperity, growth and stability from a radically different set of energy sources. 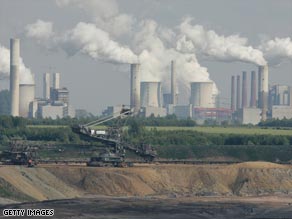 Many governments have recognized the need to wean themselves off fossil fuels in favor of renewable energy.

In the 21st century governments across the world are being forced to ask themselves daunting questions about the long-term viability, sustainability and safety of their traditional energy supplies.

Gas and oil face uncertain futures in term of long-term supply. And their negative impact on global warming is practically beyond doubt.

Coal, of course, is no better for the climate. But with plentiful supplies, coal-fired power stations are being built apace. Hundreds of them are going up in China and India and the United States. Combined, these three nations own half of the world's coal reserves.

The recent skyrocketing of oil prices is also compounding the problem, leading many manufacturers to buy coal to provide the raw materials for hundreds of products, including plastics and fertilizers.

Historically economists have paid scant attention to the subject of energy.

In "The Coal Question", published in 1865 English economist William Jevons argued that the rate of UK coal consumption was unsustainable. Of course, his calculations proved wrong not least because he was unable to foresee the rise of other fossil fuels.

Sixty-six years later, Harold Hotelling was putting forward his thesis showing that under competitive conditions the price of non-renewable energy increases at the market rate of interest.

Any sense of apathy towards the subject evaporated when the Middle East oil crisis in 1973 focused the minds of economists. Oil shortages forced western governments to reassess their dependency on imported "black gold" and instigated the first detailed examination of alternative and renewable energies.

But by the beginning of the 1980s the debate had taken a back seat again. Although oil supplies were no longer as imperiled, global warming was about to make the leap from scientific sideshow to political center stage.

The inherent danger of nuclear power was tragically underscored by accidents at Three Mile Island and Chernobyl. Some countries, like France, continued to press ahead with their nuclear plans, while others, like the U.S., took pause. Unsurprisingly, anti-nuclear protests reached their zenith during the decade.

As the environmental movement gathered pace in the 1990s, the question about the cost and availability of fossil fuels became increasingly overshadowed by concerns about emissions.

But industry lobby groups, such as the Global Climate Coalition, fought hard against the proposals for emission cuts which were drawn up in the Kyoto Protocol. It is argued, the group helped persuade the U.S. government to turn its back on the Kyoto Treaty, not only because developing nations weren't required to lower emissions but also because it would be bad for the U.S. economy.

So far, the 21st century has seen public and private money pour into renewable energy research and methods of mitigating the use of non-renewable power. But as yet, we are no closer to knowing how the future will be fueled.

In October 2006, the highly regarded British economist Sir Nicholas Stern delivered his report into the effects of global warming on the world economy. His assessment was unequivocal. "Climate change," he said, "is the greatest and widest-ranging market failure ever seen." It was a stark and high-profile warning which garnered both praise and criticism.

The new collision of science, politics and big business over the issues of climate change and energy economics is making for a highly complex and often confusing debate. E-mail to a friend