(CNN) -- Jeremy Rifkin is an internationally renowned economist, social critic and author. Since 1977 he has been president of the Foundation On Economic Trends (FOET). For the last 14 years he has been a fellow at the Wharton School's Executive Education Program. He has written 17 highly successful and thought-provoking books including "The End of Work" (1995), "The Hydrogen Economy" (2002) and most recently "The European Dream" (2004). 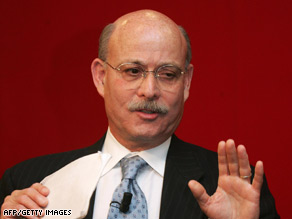 Jeremy Rifkin is president of the Foundation On Economic Trends

In a career spanning 40 years, Rifkin has examined the emerging trends in science and technology and assessed their cultural, environmental and economic impact on society. He currently serves as an advisor to the European Union, the European Commission, the European Parliament and several EU heads of state on a range of issues relating to energy, climate change and sustainable development.

Previously Rifkin has been a key player in shaping public policy in the United States testifying before a host of congressional committees. A fluent and engaging public speaker he regularly lectures to business leaders, politicians and students all over the world.