(CNN) -- Olafur Ragnar Grimsson is currently enjoying a third term as President of the Republic of Iceland. Since first being elected in 1996, Grimsson has been a passionate advocate of international cooperation in combating climate change. 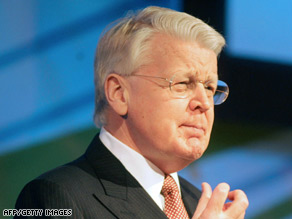 Whilst Iceland still imports oil for its transport, electricity is generated from hydroelectric power. And heating is provided by geothermal power -- an abundant source in energy due to Iceland's geographical position sitting above two continental plates.

Iceland is also pioneering the use of hydrogen power with several projects testing the viability of this renewable energy.

Grimsson promotes the intelligent use of renewable energy resources and is providing world leaders with an invaluable insight into how their own economies might make the switch to more renewable sources of energy.