Of all the power supplies in the energy mix, nuclear has historically been the most criticized and controversial. But this most unpopular of power sources has recently resurfaced in political and economic dialogue. 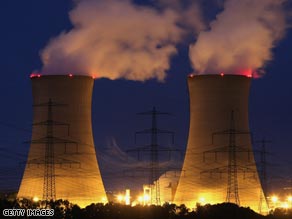 Why is nuclear power back on the energy agenda?

The simple answer is climate change. Nuclear power stations are almost carbon neutral when operational. This has proved attractive to politicians who are keen to utilize a proven and powerful technology to reduce greenhouse gas emissions and meet the targets set down by the Kyoto Treaty. They also view the nuclear option as attractive as it shores up concerns about energy supply -- an increasingly vital debate in the 21st century.

How many nuclear power stations are currently operational worldwide?

The European Nuclear Society lists a total of 439 operational plants worldwide, with a further 35 currently under construction.

The top five users of nuclear power are the United States with 104 plants, France with 59, Japan has 55, Russia 31 and South Korea has 20. Before the Chernobyl disaster in 1986, the nuclear building program was experiencing rapid growth. And whilst nuclear countries have kept existing plants in operation since, building programs have slowed -- in the case of the United States, it has stopped altogether.

But the International Atomic Energy Agency (IAEA) Analyst, Alan McDonald says that growth has kept pace with the expansion of world electricity supplies.

Currently, nuclear power contributes around a 5 percent slice of world energy -- and provides about 15 percent of the world's electricity. In 2007, the IAEA predicted that nuclear power would grow by between 25 and 93 percent by 2030.

But aren't they massively expensive to build? Shouldn't we be using this money to invest in renewable energy?

These are points which critics regularly voice. Nuclear power stations do cost billions of dollars to construct.

There is also a considerable environmental cost in mining uranium, building reactors and disposing of the radioactive waste -- an average nuclear power plant produces around 30 tons of waste every year.

All these activities produce considerable amounts of CO2. The economic cost of waste disposal alone is vast. According to Friends of the Earth, disposing of the existing waste from the UK's 19 reactors will in total cost a staggering $110 billion. And this is all before we start worrying about decommissioning costs, potential leaks and disasters that come with the territory.

That's all very well, but surely if they can help reduce CO2 emissions that's a good thing isn't it?

Yes, as stated earlier, nuclear power plants, day to day, produce extremely small quantities of CO2 compared with their fossil fuel cousins. A number of prominent environmentalists, including "The Revenge of Gaia" author James Lovelock, and Bruno Comby, author of the book "Environmentalists For Nuclear Energy", support the use of nuclear energy. But there are well-founded concerns about the ability of nuclear power to deal effectively with global warming over the next few years.

Because construction slowed after Chernobyl, many of the world's reactors are now old and approaching retirement -- all but one of the UK's active reactors will be closed down by 2023. And new plants take years to build. The UK Government, which has recently given the green light to a new nuclear building program, won't have the first new ones online before 2017.

Putting all other arguments aside, critics say that nuclear power is going to provide too little, too late. Jeremy Rifkin, president of the Foundation on Economic Trends and author of the Hydrogen Economy, told CNN: "To get any appreciable impact on climate change you have to get 20 percent from renewable energies. For nuclear power to achieve this figure would mean building 3000 nuclear plants -- that's three power plants every 30 days for the next 60 years."

The problems don't end there, Rifkin says. "We still don't know how to get rid of the nuclear waste. There is a problem of uranium deficits between 2025 and 2035 and there are also security threats."

But the most important factor, according to Rifkin, is that we don't have enough water. "In France -- which is the quintessential nuclear country -- 40 percent of all the water consumed every year goes to cooling the nuclear reactors. And when it comes back it's heated and it dehydrates the lakes and streams and furthers climate change drought. During the heat wave of 2003, there wasn't enough water to cool the reactors, so they had to slow them down," he said.

What's this I've heard about nuclear fusion? Perhaps it could save the day?

Another way of producing energy is nuclear fusion -- the joining of nuclear atoms using extremely high temperatures. Many scientists believe it will be a viable source of energy and could have a major positive impact on climate change. Not only does nuclear fusion generate more energy it also produces far less radioactive waste than traditional fission plants.

France is currently playing host to the International Thermonuclear Experimental Reactor (ITER) at a site in Cadarache in southern France. The project, which is costing a whopping $12 billion, is a joint venture between the European Union, the United States, Russia, Japan, South Korea and China and India.

But the first commercial plant is still a long way off. Should everything go smoothly, ITER predict fusion-powered electricity will be available by 2045.

Click here to read CNN's interview with NRG Energy President and CEO, David Crane. In September 2007, NRG Energy submitted the first application for a new nuclear reactor in the U.S. in nearly three decades. Read what someone at the heart of the nuclear debate has to say on Principal Voices.