LONDON, England (CNN) -- Later this summer, a motor rally will make its way across Europe. Nothing strange in that you might think. But this is a race with a difference -- a "banger rally" if you like -- and one with a well-tuned environmental message. 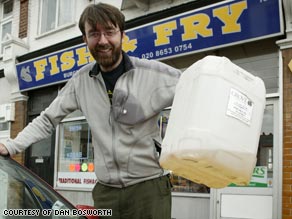 Andy Pag is leading a "chip fat" rally to Greece in August 2008.

The "Grease to Greece" expedition will attempt to travel from the UK to Greece powered exclusively by chip fat scrounged from a variety of restaurants, kebab shops and burger vans en route.

Organizer Andy Pag said: "The aim is to see if using vegetable oil for long distances is practical and feasible, and to have a bit of a laugh on the way."

Pag, who lives in London, is no stranger to environmentally-friendly jaunts. In 2007, Pag successfully drove a bio-truck powered by waste chocolate from the UK to Timbuktu.

The starting point for this summer's road trip is, not surprisingly, a 1950's style greasy spoon cafe in South London. The team will then set off for the continent traveling down through Germany -- stopping off at the Nurburgring for the Grease Lightening stage -- before heading off towards Austria and then Italy, before following the Croatian coast down to Greece.

The "fat finding" mission, as organizers have dubbed it, will start on the 16th August. It will take around two weeks to reach the finish line.

If teams find waste oil hard to come by they can load up with fresh cooking oil from supermarkets. But the aim is to show that carbon neutral motoring, using waste fat as a biofuel, is achievable.

Pag told CNN that he currently has 15 spaces filled and that there are still a few places left. "All you need is a diesel car," he said.

With conventional fuel prices high and rising, Pag couldn't have picked a better time to take on the challenge.

Next year, he plans to fly from the UK to China powered by fuel created from landfill waste. The idea is to highlight the process of making low-carbon aviation fuel. "It's such an exciting concept because it could revolutionize the aviation industry and the way we think about travel," Pag said.

"The key factors are that it needs to economically and environmentally viable. So far the experiments that have been done haven't really hit the mark yet, but it's good that they are developing the ideas."

If you want join the "Grease to Greece" challenge or want to find out more about the trip follow the link here.