Quotes of the day: Grimsson

DOHA, Qatar (CNN) -- Icelandic President Olafur Grimsson opened the Doha debate by naming energy as the most fundamental question of the 21st Century. 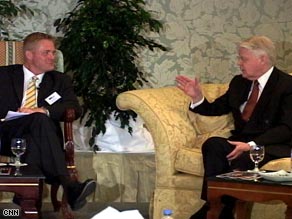 Icelandic President Olafur Grimsson responds to a question from CNN anchor Michael Holmes during the debate on "Economics of Energy."

In the last 40 years he's witnessed a dramatic change in the way the island sources its fuel.

In the sixties, coal and oil powered the country's economy. Now, renewable energy provides all the island's electricity, and more than 80 percent of its total fuel requirements.

Grimsson sees his country as being "proof that it is possible within the lifetime of one generation to transform the energy systems of our countries because I don't accept that we are so special that only we can do it."

Here's what President Grimsson had to say about the Iceland experience at the Principal Voices debate on the "Economics of Energy."

"Energy is the most fundamental question of the 21st Century, with all due respect to all the other problems. There is no challenge as fundamental as energy. How we meet that demand will have as we all know have a great impact on the climate and so on. So that is why we need to marshall every source of energy."

"We tend to forget that we are blessed with two fundamental long lasting sources of energy -- one is the fire inside the earth. We sit on it, we sleep on it, we walk on it, but we need to harness it. Geothermal: we learn about it in school and then we tend to forget about it. And the other is the sun above our head. These energy sources will last long after the oil has been exhausted."

"If we combine that with wind and wave power and other resources like bioenergy we will have the possibility of meeting the energy demands required to sustain a growing economy for every country in the world, not only in this century but the centuries to come."

On a global consensus

"I believe that the global consensus is moving in such a direction that everybody will see it in their interest to join hands. People often say, 'What about China and India?' In the last year or two the leaders of China and India have realized that whoever created the CO2 problem, primarily the U.S. and Europe, the melting of the glaciers Himalayas will create potentially the greatest global ecological disaster on earth -- bigger than the rising of the sea levels -- and it will primarily affect China and India. So whether they like it or not, the melting of the glaciers in the Himalayas in the next 30 or 40 years will create enormous economic and food and electricity and human problems, because all the great rivers of India and China originate in the Himalayas. So all of this together is creating a consensus based on self-interest. It's not a humanitarian consensus or simply goodwill. It is hard-headed interest-driven consensus."

On leadership in the Middle East

"I have been impressed in my discussions with leaders of for example Qatar and Abu Dhabi in the last few months how visionary they are about the need to use part of their oil or gas wealth to encourage clean energy investment in solar, in wind, hydro and geothermal all over the world. I have to admit I find more visionary will from the leadership of Abu Dhabi and Qatar in this area with the respect to global investment and active involvement than I find from some of my European colleagues."

"When the China leadership say to us in China 50 years is not a long time, for Abu Dhabi that the oil will run out in the next 60 or 70 years, and Qatar might have used most of the gas resources in the next 100 to 150 years, a visionary leader of a country which wants to create a good living for his or her grandchildren or great grandchildren thinks about these issues. So maybe Qatar and Abu Dhabi and other places in the region are now in the process of taking a global leadership on this issue than a greater extent than the rest of us have acknowledged."