Quotes of the day: Adelegan

Doha, QATAR (CNN) -- Nowhere is the need for cheaper, renewable energy more apparent than Africa. There, the poorest villagers huddle around candles because even kerosene is too expensive. 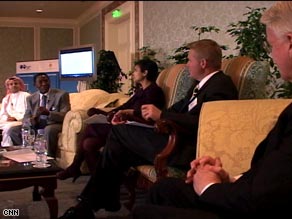 Dr. Joseph Adelegan addresses the panel at the Principal Voices debate on the "Economics of Energy."

Seven years ago, Dr. Joseph Adelegan started the "Cows to Kilowatts" Clean Development Mechanism (CDM) project in Nigeria. It creates cheap renewable energy and fertilizer from slaughterhouse waste. Locals use the gas for cooking and the fertilizer for their crops.

Dr. Adelegan told the Principal Voices debate on the "Economics of Energy" in Doha that Africa has contributed the least to global warming, but is likely to suffer the most.

"Research studies have shown that Africa and South East Asia will likely suffer most. For instance, they expect drought in some parts of Africa, extreme hunger, you expect malaria in some places like Nairobi that was never expected before, " he said.

Dr. Adelegan told the panel that developed countries should be providing aid to help poorer countries make the transition from fossil fuels to cleaner energy.

He believes that in the future the world's fuel demands can be met through renewable energy, and says there's an opportunity to capture energy from landfill in Africa and elsewhere.

Here's what else he had to say.

"When you look at world energy demand and the transition to low carbon economy, we discovered that from previous studies that the renewable energies available in the world is about 3000 times able to meet world energy demand. And when you look at situation in Africa, you discover that there is a lot of agricultural waste. For you to be able to craft innovative solution to the global energy problem you must be able to understand the various contribution from various sectors to the world of global energy. For instance, agriculture contributes about 16% to the world greenhouse gas emission; which is an area that has not been looked at properly."

On imposing sanctions on the developed world

"If you look at it, the contribution of Africa to the issue of climate change is very little. The major polluters are the developed countries, for instance, the U.S. contributes about 22 percent to the world greenhouse gases. When you look at it also, the majority of it comes from coal. For instance, coal contributes 25 percent to the world greenhouse gases. And Africa pays very dearly for it. Research studies have shown that Africa and South East Asia will likely suffer most. For instance, they expect drought in some parts of Africa, extreme hunger, you expect malaria in some places like Nairobi that was never expected before. I think the issue should be the issue of political principal, but enforcement."

"If you look at it on a global scale, coal contributes to 25 percent of global greenhouse gas emissions. In the United States, 50 percent of their electricity generation comes from coal, only 20 percent comes from nuclear fission reactors, about 7 percent come from hydro, and two percent from petroleum. There are a lot of issues about nuclear efficient reactors, there's the safety. How you handle nuclear waste? The issue of nuclear fission reactors may not be the best alternative. It's not safe and the waste is a huge issue to handle."

On landfill as an opportunity

"Landfill is a huge opportunity. In Africa we have heaps of solid waste all over the place. If we can get this to landfill and design a properly engineered landfill it is a huge opportunity to generate methane which can be captured for electricity. It's not only applicable to Africa but other developed countries. It's do-able and economically feasible, viable."