London, England (CNN) -- Twenty four hours before the greatest scientific experiment of our time gets underway at CERN's Large Hadron Collider, political and scientific dignitaries assembled at a site a few hundred miles north east of the French/Swiss border at a site in Germany to inaugurate another groundbreaking engineering test. 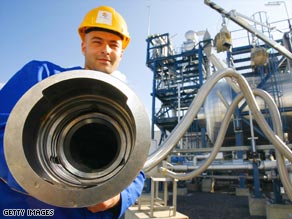 An engineer holds a pipe which will collect CO2 from the new CCS pilot project in Germany.

Whilst this project isn't attempting to work out how the world came into existence, it may go some way to preserving our life on it as Swedish energy company Vattenfall officially switches on the world's first pilot plant to test a method of carbon capture and storage (CCS) which it hopes will become commercially viable.

The Oxyfuel combustion process first separates nitrogen -- which makes up about 78 percent of air -- from the atmosphere allowing coal to be burnt with pure oxygen in a boiler. The steam powered turbines provide power in the usual way, but separating the CO2 from the flue gases is far easier.

Once small particles and sulphur have been removed the flue gas is then cooled allowing the water to condense leaving near pure CO2, which is then compressed into a liquid state and readied for transportation to a storage facility underground.

The various components of the process are not new -- the chemical industry has been using the technology for some time.

Vattenfall, one of Europe's biggest power companies, initially drew up plans for the project in 2001 and construction on the site began just three years ago.

Housed on the same site as two vast 800 MW steam turbine generators at the Schwarze Pumpe plant, the pilot plant is only a fraction of the size of the main generators -- just 30 MW -- but Vattenfall hopes that the next step -- a bigger demonstration version -- will realize commercial viability by around 2015 to 2020.

Damian Muller, Vattenfall's Head of Communications for the CCS project, told CNN: "The pilot stage is going to last five years and will deliver 100,000 tons of CO2. We have a signed an agreement with Gaz de France [a French state-owned utility], which starts in 2009 which will allow us to test the storing of CO2 in a depleted natural gas field in Altmark, [Germany]."

The storage facility is located 3.5 kilometers beneath the earth's surface and, if the pilot project is successful, should, according to Muller, have enough space to last the lifetime of the power plant (around 40 years).

Vattenfall, which supplies electricity to three million customers in Germany, invited around 500 guests to witness the inauguration of the €70 million ($100 million) pilot plant. The company is optimistic that the project will position it favorably in the evolving energy marketplace.

Vattenfall's enthusiasm for such CCS projects is shared by Professor Stuart Haszeldine from the University of Edinburgh's School of GeoSciences, who describes the pilot as "very exciting".

"Every time people talk about CCS," he told CNN, "the criticizm comes up that nobody has demonstrated it anywhere in the world. Vattenfall have planned carefully and invested where they have received confidence from the state. They are taking a lead."

Whilst all the different parts of the Vattenfall oxyfuel pilot have, at one time or another, been demonstrated, it is the first time that all the components have been linked up and put to use in the energy sector.

"This should be the first of several power plants which are built and demonstrated around the world," Haszeldine said. He expects that over the next two or three years people will building full-scale CCS power plants.

Currently there are two other main technology options for capturing CO2. Post-combustion, which the UK is pinning its CCS hopes on, separates the CO2 from the gas after it has burned.

Pre-combustion, also known as Integrated Gasification Combined Cycle (IGCC), removes CO2 from the coal before combustion and turns it into a gaseous fuel.

Professor Haszeldine says that all three technologies are believed to be more or less the same in terms of performance. "Over the next five years, we'll find out if those calculations are correct or if indeed the oxyfuel method is a more elegant way of separating CO2 and ends up being cheaper. The key development area now will be to find ways of separating CO2 from the air with less energy penalty," he said.

Haszeldine, a CCS specialist, is confident that CO2 can be stored safely underground.

"Good sites should be easy to find for the first half dozen projects in any country. Some of the best known sites would be where oil and gas has been reservoired in sandstone deep below ground," he said.

Nevertheless, there is plenty of opposition from environmental groups. In its report "False Hope", Greenpeace says that CCS reduces coal efficiency by anything from 10 to 40 percent. And the German environmental group BUND describes CCS as a "fig leaf" which allows companies and governments to continue building coal-fired power plants. Many critics simply want governments to push ahead with more renewable energy solutions. But Professor Haszeldine is convinced CCS has a crucial role to play.

"We do not have enough capability in the world to build renewable energy electricity generation schemes instantaneously or even in the next 20 to 30 years," he said. "Large-scale generation with offshore windmills or using tidal currents or waves are still in the experimental stage and need to be perfected.

"We would not be building CCS if we had started off by using renewable energy for the world. But we didn't. So we are stuck in a place we didn't want to be and this is a means to get out of that place with the minimum possible damage.

"Personally, I would anticipate or hope that these are probably the last generation of coal-fired power stations we'll be building. By 2050 we will have a lot more renewable power."

Have your say on CCS in the "sound off" box below.