LONDON, England (CNN) -- The creators are billing it as one of the coolest hostels in the world and it's undoubtedly one of the most novel overnight stays you are ever likely to experience. Welcome to the Jumbo Hostel -- an old Boeing 747 which is being converted into a 25-room hostel at the Stockholm-Arlanda airport. 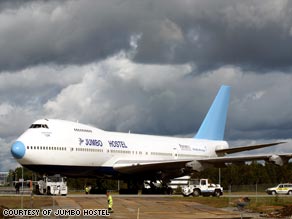 The Jumbo Hostel is currently being refurbished and will open for business in December 2008.

The idea is the brainchild of Swedish businessman and entrepreneur Oscar Dios, who has been running hostels in Uppsala, Sweden for the past five years.

Renovation work is underway on a plane which used to carry in excess of 350 passengers. Jumbo Hostel is scheduled to open for business in December 2008 and will provide accommodation for up to 85 guests.

CNN spoke to Dios about how he got the project off the ground. "We were looking to expand the business but it was more or less impossible to find reasonably priced housing at the airport. And you cannot build a new house and run a hostel because it is too expensive," he said.

It was in 2006 that Dios first heard about the Boeing 747, which was for sale. Formerly flown by the now defunct Transjet Airways, the plane was wasting away in a hangar at Arlanda airport and hadn't flown since 2002.

"The plane was in a terrible state when we first saw it," he said. "But we contacted the owners and gave them a fairly good offer, I think."

Although he wasn't prepared to let on exactly how much he paid for the old Boeing, Dios confirmed that the price tag was a six-figure sum (in euros).

In August 2008 the plane was finally moved to its permanent home at Arlanda airport's main entrance, where it will now stay.

Apart from the engines being removed from the wings before purchase, the plane, from the outside, looks almost exactly as it did when it was grounded.

The interior, for obvious reasons, is a different matter. Dismantling and stripping out all the old equipment and instruments started earlier this year. The final phase of refurbishment is nearing completion and Dios says it complies with the same building regulations required for a house.

There will be two types of accommodation. A basic room will be roughly six square meters in size with sleeping space for three adults. It will cost €110 ($150) per night.

But if you fancy splashing out, you can book the top deck, complete with the cockpit suite, which comes with a private bathroom and panoramic views of takeoffs and landings. Dios envisages newlyweds taking advantage of this more expensive option, which costs €500 ($700).

If you don't want to spend a whole night on board you can hop on and relax in the cafe suite for a couple of hours at a cost of €25 ($35). This will also afford you the opportunity of striding out onto the wing and taking in the views of the bustling airport.

While most large commercial planes end up in vast aircraft boneyards, some, like the Jumbo Hostel, find new lives.

New York based urban architects Lot-ek plan to create a library in Guadalajara, Mexico, made by recycling 200 Boeing 727 and 737 fuselages. And Californian millionaire Francie Rehwald has started building a house from the parts of another scrapped 747.