LONDON, England (CNN) -- As an organization they're used to investing billions of dollars in scientific experiments that further our knowledge of earth and space. But the only bill to speak of on this occasion is orange and attached to the body of a rubber duck. 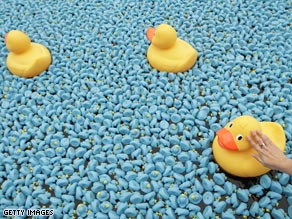 In the name of climate change science, researchers at NASA have dropped 90 rubber ducks into holes of Greenland's fastest moving glacier: the Jakobshavn Glacier in Baffin Bay.

Scientists remain unsure as to why glaciers speed up their movement in the summer months and it is hoped that the rubber ducks -- labeled with the words "science experiment" and "reward" in three languages, along with an email address -- will shed some light on the phenomenon.

One theory is that the summer sun melts ice on the surface of the glacier which creates pools of water which then flow into moulins -- narrow tubular shafts in the glacier. These then transport the water from the top to the underside of the glacier.

It's thought that this base water acts as a lubricant to speed up the movement of the glacier towards the sea.

It is hoped the ducks will help show how the water moves through the ice.

In conjunction with the ducks, Nasa has also launched a GPS probe which they hope will tell them more about the inner workings of the glacier.

So far, neither the probe nor any of the ducks have turned up.

Alberto Behar of NASA's Jet Propulsion Laboratory in California told Reuters: "We haven't heard back but it may take some time until somebody actually finds it and decides to send us an e-mail that they have found it."

The Jakobshavn Glacier is responsible for seven percent of all ice which is peeling off Greenland and its ice sheets could contribute to sea levels rising this century.

The glacier's menace was also felt last century. Experts believe that it was the source of the iceberg which sank the Titanic in 1912.

It's not the first time rubber ducks have helped scientists track water flows. Thousands fell into the sea in 1992 when a container ship bound for Seattle from China shed its load in a storm in the Pacific Ocean. The ducks spent years at sea and washed up in all corners of the globe, telling oceanographers much about the surface currents of the oceans.

All About Global Climate Change • NASA