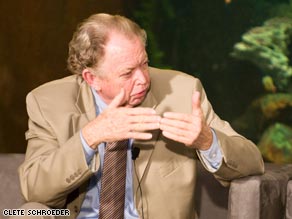 Founder and chairman of The Seawater Foundation, Carl Hodges at the Principal Voices Climate Change debate.

The results are spectacular, with seawater-tolerant plants (including the biofuel crop salicornia) providing a new home for wildlife as well as creating food, jobs and prosperity for previously poverty-stricken areas. In Eritrea, Africa, the Seawater Foundation has created the world's first integrated sea farm for shrimp, fish and halophytes covering over 1000 hectares.

Principal Voices spoke to Hodges on the site of his latest project on the Mexico coast.

CNN: Give us a sense of the Seawater Foundation's mission.

Carl Hodges: Well, 30 years ago, we began to use seawater for agriculture and to create wealth and jobs. And I thought there were additional things that maybe business wouldn't necessarily include. So we thought we needed a partnership between a very socially orientated organization and a classical business -- they both needed to move towards one another a little bit. And that we would have a partnership that would actually address the kind of global problems that you see here [in Mexico].

CNN: Can you explain how you go about making man-made rivers?

CH: Well, you cut a channel. Except you cut it as a river. For example, in Brownsville, Texas, they have a sea channel that's a port. It comes inland 33 kilometers and ships come in. We made that with big dredging machines. You cut a channel, but you call it a river, because it doesn't go on to a dead end. Instead the water goes in, and it irrigates things. When you stand at the mouth of it, you feel exactly like you would at the mouth of a river. Except you look down and the water is going in and not coming back. It goes in to produce animals, shrimp and fish, and then with their excrement involved, it irrigates trees that turn into forests. The forests have meadows of crops that provide food and fuel. And beauty. I think that's an important value.

CNN: How can the sea save us from climate change?

CH: Well, the sea presents a problem because the sea levels are coming up. But it's also an opportunity. By bringing that rising sea water onto the land we can irrigate agriculture. A new form of agriculture. Greenery will take carbon out of the air -- we have to take some out -- because we're putting too much in. And it will produce a biofuel that doesn't put any carbon in.

The problem sort of pushes us to a solution. We've either got to build sea walls, or we've got to move tens of millions of people away from the edge of the sea. But instead of that -- instead of cost -- we invest money in these new production systems, creating jobs, creating wealth, and taking big steps in solving global warming.

CNN: At the heart of your vision for the agriculture is a plant called salicornia. Tell us about that.

CH: It's an amazing plant. When we first started looking for plants, we looked at over 700 in some detail, and we listed them. And the only reason we had salicornia was that it was pretty.

A young lady was counting the seed, and she wiped her fingernails on a paper towel and she noticed that the towel looked oily. And she was right. It has about 30-40% very high quality vegetable oil. And so we said: 'My God, it's an oil seed crop'. It's like soy bean.

And so out of the 700 we picked 20, then we picked three, and one of the three was salicornia. And now it's the star.

Salicornia produces a high quality vegetable oil on sea water. On land it's not competitive for food production. It produces at a rate that is probably one of the most economical biofuels on the planet. We suggested it as a bio fuel in 1982. And in 1993 we actually ran a vehicle on salicornia oil and wrote a paper where I said it will be bio fuel of the future.

CNN: What do you envisage will happen with these seawater projects in the future?

CH: I see seawater rivers around the world. Right now we're looking at 34 countries where we could have 50 rivers of the scale we've been looking at in Mexico and bigger. And they would come inland and they would irrigate a quantity of desert coast in an ecologically sound fashion. It would be on a scale that takes so much water inland that it would stop sea level rises in about ten years.

The world would continue to build more of these over the next 40, 50, 60 years. Not only would we catch up with stopping sea level rise, we would also be making a significant contribution to taking enough carbon out of the air. With efficient systems, transportation and power plants, we'd stop global warming.

CNN: What did you learn from the sea farm venture you set up in Eritrea in 1999?

CH: In my 50 years of science, my four and a half years in Eritrea were the most rewarding. I loved every minute of it. The thing I learned that was most strong was what people really need is purpose and hope...and the sea. People -- I mean women and children -- would come to work at night, singing, carrying rocks on their head -- at their initiative -- to finish a pond, so that they and I would be pleased that it was done. I used to go to work in the morning and just damn near cry. I loved the people, I loved the project, and the world will look back upon that one day as one of the really significant projects.

CNN: What is your view on how the governments of the world's richest nations are tackling the issue of climate change?

CH: Well, I'm embarrassed by the U.S. administration for the last eight years. I don't think they're bad people. I just think that they wish it were different. They weren't prepared to address it. I think there's leadership in these issues in Europe. And I think that there is hope in both Presidential candidates, Democratic and Republican.

CNN: This is a big vision. Just how realistic is your solution?

CH: I think 100 percent. I think there's a lot of very good people. Scientists, businessmen, people working night and day here that are convinced that it will happen. And we have lots of experience. This is not an overnight idea because the seas are coming up. We started seawater agriculture. We started trying to de-salt the oceans in the '60s with solar systems, and realized that we'd be much better off to make the deserts green. We'd be much better off trying to get plants that are already out there in the estuaries of the world, and domesticate them, get products out of them and grow what are called halophytes -- plants that tolerate and enjoy sea water. And that's what we've done.