Are sonar tests harming whales? The Supreme Court weighs in

WASHINGTON (CNN) -- The Supreme Court appeared conflicted Wednesday as it juggled national security and environmental concerns in a case over whether the U.S. Navy is doing enough to protect whales from underwater sonar tests it conducts. 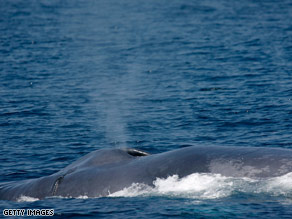 The Supreme Court is weighing whether the Navy does enough to protect whales from undersea sonar tests.

At issue is the power of the president to issue executive waivers allowing such tests, and whether federal judges can issue preliminary injunctions blocking them.

Environmentalists successfully sued the Pentagon over the practice, forcing major changes the Navy's annual offshore training exercises in March. President Bush had issued an emergency waiver to allow the exercises to go on without the filing of an environmental impact study (EIS), but the lower court ruling blocked the use of sonar.

Military officials are asking the justices to intervene, arguing the restriction could hamper military readiness in time of war, since new sonar technology is needed to detect increasingly sophisticated enemy submarines.

Justice David Souter expressed repeated skepticism that an emergency existed allowing the president to try to bypass normal environmental reviews. "There was no 'emergency' here except one which was created by the Navy's apparently deliberate inattention" to file an EIS in a timely fashion, trying "in effect to sort of neutralize by keeping everybody in the dark until the last moment," he said.

But Justice Samuel Alito worried the executive constitutional authority is being eroded. "Isn't it incredibly odd about a single [federal] district court judge making a determination [limiting exercises] that is contrary to the determination that the Navy has made?"

That federal judge, in ruling against the government last March, said it was "constitutionally suspect" for Bush to issue the national security exemption to allow skipping the EIS.

One of the environmental organizations that sued the Defense Department told the justices that the exercises had been planned in advance and that the Navy was required under law to conduct more extensive environmental tests than it had. Richard Kendall of the Natural Resources Defense Council also said the military appears to be able to work under the restrictions, since eight of 14 planned exercises have been carried out since the restrictions went into effect.

The Navy says the courts are protecting sea creatures rather than people.

"In ordering additional mitigation to reduce the risk to marine mammals, the order shifts the risk to sailors and Marines," Navy spokesman Capt. Scott Gureck told CNN in March.

Representing the military and the White House, Solicitor General Gregory Garre told the high court that the tests are "vitally important to the survival of our naval strike groups deployed around the world and therefore critical to the nation's security."

The waters of Southern California are home to dozens of species of whales, dolphins, seals, and sea lions, nine of them federally listed as endangered or threatened. Federal courts have cited scientific studies and the Navy's own conclusions that high levels of sonar can cause hearing loss and disorientation in the animals.

The U.S. Navy demonstrated for CNN in February its on-board procedures for turning down mid-frequency sonar when whales come within 1,000 meters, and shutting it off completely when they approach 200 meters.

Watch how a Navy ship reacts when it encounters a whale »

The sonar sounds like a "ping, ping" noise, and it can be reduced as necessary, officers said.

But environmentalists say the sonar can hurt whales much further than 1,000 meters away. Kendall said the noise created by the sonar "was like having a jet engine in the Supreme Court multiplied 2,000 times, compensating for water."

In 2000, 16 whales beached themselves in the Bahamas, and the Navy concluded too many sonar ships had been operating in a narrow underwater channel.

The service says it is funding $16 million in independent research to minimize sonar's effect on marine mammals.

Justice Stephen Breyer seemed divided between the two sides, and his vote could prove crucial. He agreed with several of his colleagues that the whole point of an environmental impact study is to assess potential harm before exercises begin. "You have an EIS for the reason that the agency itself, once it reads it, might decide to do something else. That's the whole point of an EIS."

But the 70-year-old justice also noted the sonar tests are necessary to train crews to find enemy subs. "I see an admiral come along with an affidavit that says you've got to train people," he said "or there will be subs hiding there with all kinds of terrible weapons."

He added, "I am nervous about it."

The case is Winter v. Natural Resources Defense Council (07-1239). A ruling is expected in a few months.