Earth, but not as we know it

LONDON, England (CNN) -- Dr Jan Zalasiewicz is the author of "The Earth After Us -- What legacy will humans leave in the rocks?" His book examines what might remain of our civilization in the strata 100 million years from now, and how aliens might piece together the story of the planet and our brief but dramatic impact on it. 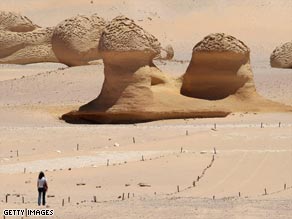 Wadi El-Hutan, Egypt: The ancient Tethys Sea receded between 250 and 35 million years ago.

Comparing present day environmental change with perturbations back in the deep past has always interested Zalasiewicz, a lecturer in geology at the UK's University of Leicester. Here he imagines what distinctive traces humans might leave in the strata and how the past is improving our knowledge of climate change.

CNN: How far does our geological knowledge go back?

Dr Jan Zalasiewicz: Right to the beginning. If you look at meteorites then we have bits of the origin of the solar system -- that's a little bit over 4,500 million years ago.

There has recently been a report saying that geologists have found some rocks which are possibly over four billion years old. And there are certainly crystals that have been found that are in excess of 4.3 billion years old. So we are getting very close to the origin of the Earth.

A more or less continuous record starts from about 3.8 billion years. From there, by and large, there is a very good record. The Earth really has a fantastic record of the past. Because of the peculiarities of the way continents and oceans form on Earth it is far better than anything one could ever hope to find on Mars, Mercury or Venus. Earth is the history planet.

CNN: Does a reliable climate record stretch back 3.8 billion years?

JZ: It does, though it gets better and better as the rocks get younger. Way back that far, there are some indications that the Earth was really quite warm. It might have been upwards of 50-60 degrees centigrade, although this evidence is uncertain.

But there is cast iron evidence going back up to 2.5 billion years ago of episodes of cold (glaciations). These leave distinctive marks on the geography of the time which translates into the strata we now look at.

CNN: How would you describe our impact on the planet?

JZ: What we're doing is coming into this rather dynamic yet delicately balanced system where you switch from one state to another and it's like we are hitting it hard with a hammer.

Because of the effect of land use changes we are changing how reflective the Earth is. And particularly by putting more greenhouse gases into the atmosphere we're changing the heat balance of the Earth. The best prediction, held by the great majority of scientists, is that it will tip the Earth into a warmer state, something like that which pertained before the ice ages started (between three and tens of million years ago).

But the timing isn't certain. When change takes place it often changes at times called tipping points. Things carry on much the same while the system is being pushed and then it gives way fairly quickly and refashions itself into a new system.

If I was a betting man, I would say that somewhere within the next few centuries or perhaps even the next few decades the earth will re-orientate itself into what will likely be a global climate warmer by somewhere between three to five degrees centigrade.

CNN: What is geology teaching us about the climate?

Over a few thousand, to tens of thousands of years the Earth's temperature shot up by about five degrees centigrade. Then gradually over about 100 thousand years or so the Earth's temperature declined back to more or less what it was beforehand. Those episodes were associated with all kinds of other changes -- the oceans grew more stagnant, with patches of oxygen deprivation. Some creatures liked it and spread -- some of the kind of algae that form the red tides in the sea today spread far north and south. Other creatures hated it and became extinct. There was a kind of refashioning of the Earth's ocean systems, the atmosphere and the patterns of animals and plants.

The physical systems gradually got back to more or less the state before, but of course when you change biology you change it forever. Those changes that took place determined the course of evolution of life on Earth thereafter.

CNN: What part has CO2 played in previous warming episodes?

JZ: We've got very good records for CO2 for the last one million years because you get bubbles of air trapped in polar ice and those have been drilled, measured, analyzed and they give an entirely consistent story showing temperature rises in step with CO2. There is an argument as to cause and effect -- but CO2's heat-trapping effects have been known for over a century.

Going further back in time it is harder to measure CO2. You can look at fossil leaves or chemistry of the limestones laid down in the oceans or of fossils. They give an idea that 100 million years ago CO2 levels were several times higher that today. But then there were hardly any ice caps on Earth and sea levels were getting on for a hundred meters higher than now.

Though we can't measure exactly the levels CO2 in the atmosphere at the time, we can see changes in carbon atoms that went into fossils. These can reveal ancient carbon release events.

The worry is that we're putting in some CO2 and maybe that is only the beginning. We warm the climate a bit and maybe disturb huge reservoirs of methane trapped in ocean floor sediments and in permafrost. If we release those then we could have quite severe warming.

CNN: Climate change deniers often seize on evidence of previous pre-historic periods of warming as proof that humans are not to blame for the current crisis. Are they right?

JZ: They are right and they are wrong, if you like. They are right in that the earth has seen climate changes on all scales -- there have been long episodes of more or less stability and also episodes of sharp changes and we are reading those better and better. Science is advancing quite fast here.

But the climate change deniers are wrong in asserting that humans can't seriously affect climate: we can and we are doing.

We've gone out of that into a climate plateau if you like. And we are living in a warm event that has lasted longer than any of the three previous ones. The climate is a delicately balanced machine and it would be best to try and leave it set as it is. All of our lives, our agriculture, our cities, our buildings are based on the world's geography staying as it is.

The oceanographer Wallace Broecker has worked on these problems his whole life. He has a number of pithy phrases. One goes something like is; 'The climate is an angry beast. Best not to provoke it'.

It has been an angry beast in the past and our actions may well provoke it again.

What we don't want is to make it change more quickly than it would do otherwise into something that would be much less comfortable for civilization.

So far, we are a very short-lived species, about 160,000 years. The typical species span is between one and five million years. So we've arrived very recently and it's really only in the last 10,000 years -- a blink of the eye geologically -- that we've developed and it's only in the last 200 that our effects have gone global.

CNN: In what ways will our layer of strata be distinctive?

JZ: I think we are leaving a record which is different in some ways. Climate change does have analogues in the past. We are also beginning to cause a reasonably sized extinction event. There are parallels with extinction episodes in the past -- such as at the end of the Cretaceous when the dinosaurs and other creatures died out.

What is distinctive about this one I think is that as well as creatures going extinct we are transporting all kinds of creatures around the Earth. This is unprecedented.

At the same time, we are using large parts of the terrestrial land surface, removing a whole variety of species and replacing them with a very few species that we grow for food.

We are also having an effect on the seas. We are basically removing the top of the food chain. Tuna and shark populations are crashing. We've removed the cod from Newfoundland and so on.

Once these species are removed others begin to take their place. Creatures like jellyfish, which we can't use, are moving in to take that ecological space. Add to that the effect of CO2 making the sea more acidic. Past global warming have been associated with ocean acidification events and also the spread of oxygen-starved dead zones.

We are producing a mixture of all of these, which in some respects resemble these perturbations of the past. And in others like the merry-go-round of species around the Earth, we are producing something distinctive.

CNN: How would you assess the response to climate change so far?

JZ: Even in the course of a decade, it has gone from being a problem on the sidelines, to be recognized very broadly as something that should be taken very seriously. The next step is to prepare and carry out some action that is commensurate with the scale of the problem.

We need to solve the major problems like energy. We need lots of energy but in the long run deriving our energy from carbon is highly dangerous. We need to put alternative forms of energy on stream very quickly.

We also need to feed ourselves sustainably. There are a lot of humans on this planet and we are already using almost all the arable land.

There are things we can do though. In developed countries and increasingly in developing countries there is strongly meat based diets and that uses a lot of energy. With a more vegetarian diet, you can feed more people using less space. I'm not suggesting everybody should do that but I think if one moves in that direction one could ease the path for future generations.

If you take any other species in this situation which finds a habitat and expands, the typical cycle is boom and bust. The thing to avoid at all costs is a bust -- it doesn't bear thinking about.

We are on this tightrope. We have to try and retain our humanity.

I say at the end of my book that if one was to look from the outside at some of the gulfs between the very rich and the very poor it would seem like science fiction.

It seems to me these imbalances themselves are driving practices that are not sustainable.

CNN: How does being a geologist affect your outlook on life?

JZ: One is always aware of the immensity and variety of the history of this planet. I guess what that does is sharpen up the sheer speed and drama of the changes that are taking place now. Geologically, they are remarkable and unprecedented. There is nothing that has hit the earth quite like we have hit it.

One then looks at normal everyday life -- trying to bring up kids, teach students at university and prepare them for life afterwards -- and yet one is always conscious that the world is changing very quickly. Current and future generations will have to try and steer the world into a state of sustainability.