LONDON, England (CNN) -- French scientists have unveiled a working prototype of a fully artificial heart which is based on the technology of satellites and airplanes. 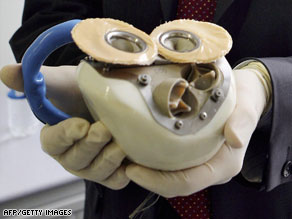 The artificial heart based on satellite and airplane technology was presented in Paris.

The device could save millions of lives and beats almost exactly like the real thing using electronic sensors to regulate heart rate and blood flow.

Developers Carmat, funded by the European space and defense group EADS, presented the device at a press conference in Paris on Monday.

Carmat's chief operating officer Patrick Coulombier told The Associated Press: "it's the same principle in the airplane as in the body."

Coulombier explained that the same tiny sensors that measure air pressure and altitude in an airplane or satellite are also in the artificial heart. This should allow the device to respond immediately if the patient needs more or less blood.

The French design has so far only been tested in animals, and now needs approval from its authorities before pushing ahead with clinical trials.

Previous artificial hearts have been unable to automatically vary their pumping speed and must be tweaked externally.

The French heart is also the most lifelike, with two pumps to send the blood into the lungs and the rest of the body, just like a real heart. Past artificial hearts have only had one pump.

The French model is made from natural materials including polymer and pig tissue, which have already been used in heart valves implanted into people.

The artificial heart would initially be for patients who had suffered a massive heart attack or who had heart failure, but might eventually be used in patients who are not that sick.

Heart disease is the world's top killer, claiming some 17 million lives a year. According to the American Heart Association, about 2,200 heart transplants were performed in the U.S. in 2006. Thousands more patients would benefit if more donor hearts were available.