Queuing psychology: Can waiting in line be fun?

(CNN) -- Warning: Standing in line can cause extreme boredom, annoyance and even rage, which is precisely why there is a fascinating science devoted to what makes people tick -- and ticked off -- when forced to wait. 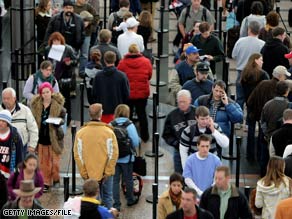 You may not know it, but the seemingly mundane task of forming a queue at the airport, a fast-food joint or a post-Thanksgiving midnight sale is the subject of careful study by experts in the field of queuing psychology.

The findings may not always reduce wait times, but they can cut frustration and make people feel better, or even happy, about waiting in line, said Richard Larson, who has researched queuing psychology for more than two decades.

"You can change a queuing experience into a very positive experience," said Larson, director of the Center for Engineering Systems Fundamentals at the Massachusetts Institute of Technology.

To do that, businesses where people often wait in line must realize some basic principles of queuing psychology.

Visitors lining up for attractions at theme parks see this principle at work with queues that often use clever design and technology to make the line itself entertaining.

"We like to view [queues] as the first scene in the story, whatever the story of that particular attraction is," said Joe Garlington, creative vice president of interactives at Walt Disney Imagineering, which develops Disney parks and resorts.

• People want to get started

• The more valuable the service, the longer the customer will wait

The line to one popular attraction at Epcot features cameras and large interactive screens that allow visitors to see themselves and play games, such as trying to burst virtual water balloons to reveal a hidden image, Garlington said.

People waiting in line for a comedy show at Walt Disney World are asked to text message jokes that may be used during the main event.

"It works as our warm-up act essentially for the show, but it also takes time while people are working through that and so it keeps them entertained while they're waiting," Garlington said.

"We do study the psychology, try to understand what our guests are thinking and make sure that we're keeping them happy as they move through the lines."

Disney employs more than 75 industrial engineers who help the company with queue management at its parks around the world, said Marilyn Waters, director of media relations at Walt Disney Imagineering.

Fair play -- or the idea of first come, first served -- is at the heart of most successful queues. It's one of the reasons most banks, airlines and fast-food restaurants have switched from several open lines that force customers to choose the line they think is moving fastest, to a single serpentine line, which guarantees first come, first served, Larson said.

Violation of fair play can lead to "queue rage." Larson himself became interested in queuing psychology after a frustrating experience he calls the "red bike incident."

He had gone to a store to buy a bicycle for his son and grew furious when he was made to wait 40 minutes to pick up his purchase in the inventory area, while other people who came after him quickly received their items.

"It took me three weeks to calm down after that," Larson said. "I realized, I'm a professor at MIT, I'm usually a sane, rational person. If this has affected me so much that I made a lifetime pledge never ever to go back to that place, it must affect other people as well," Larson said.

There are some exceptions to first come, first served, such as the express checkout lane at the supermarket. Customers buying a couple of items don't expect to get in the same line as those pushing carts filled to the brim. It's an example of another queuing psychology principle that argues people's willingness to wait is usually proportional to the quantity of service they expect to receive, Larson said.

Researchers have found that people who know ahead of time how long they will have to wait in line are less anxious than those who don't.

That's why places where you have to queue provide lots of clues about waiting time. Technology even allows some of those clues to go straight to your cell phone or other mobile device.

Hartsfield-Jackson Atlanta International, the world's busiest airport, offers "Trak-a-Line," a service that e-mails passengers when there is a change in wait times for security screening.

"People who are queuing and who are trying to meet a deadline need more information about what is happening to them to allay their anxiety," said Ben DeCosta, aviation general manager at Hartsfield-Jackson. iReport.com: What are your holiday travel plans?

Disney places signs in its parks letting visitors know the approximate wait times for rides and attractions. It's a way of managing expectations and sometimes an opportunity to beat them, Larson said. A sign may say the expected wait time is 40 minutes, when in reality it's half an hour, thus making people feel good about the final outcome.

"So even though they waited 30 minutes in line, they're happy because they think they're 10 minutes ahead of schedule," Larson said.

Garlington said the posted times at Disney's parks are pretty accurate, but that the company's goal is always to better the time that's shown on the signs.

"We'd rather surprise somebody on the positive side than the negative side," Garlington said.

Perhaps the one exception to people's aversion to lines may be the frantic rush for bargains on the Friday after Thanksgiving.

"I view [it] as a huge social event rather than a huge set of queues," Larson said. "My hunch is the lines don't bother people so much because they like to be part of a total experience of that day."