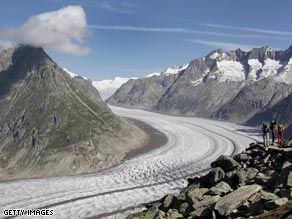 The Aletsch glacier in the Alps. Melting of mountain glaciers is accelerating worldwide.

Concentrations of CO2 in the atmosphere currently stand at 385 parts per million (ppm) and are rising at a rate of two ppm per year. This is enough, say the scientists, to encourage dangerous changes to the Earth's climate.

As a result we risk expanding desertification, food shortages, increased storm intensities, loss of coral reefs and the disappearance of mountain glaciers that supply water to hundreds of millions of people.

The report, "Target Atmospheric CO2: Where Should Humanity Aim?" appears in the latest edition of the Open Atmosphere Science Journal and brings together the expertise of ten scientists from the United States, the UK and France.

It is a departure from the previous climate estimates which predict that perilous CO2 levels will be reached later in the century.

Drawing on improved paleoclimate records and current global observations has prompted the authors to reach new conclusions about what constitutes a safe level of CO2.

Dr Hansen told CNN: "In the paleoclimate data, the Cenozoic data is the most alarming -- burning all the fossil fuels clearly would send the planet back to the ice-free state with sea level about 250 feet higher."

Hansen thinks these sorts of changes would take several centuries, but he said we would have to deal with a "holy mess...as ice sheet disintegration unfolded out of our control".

As far as current global observations are concerned, Hansen cites both the decline of Arctic sea ice and the worldwide retreat of mountain glaciers as causes for major concern.

"Once they are gone," he said, "the fresh water supplies for hundreds of millions of people dependent on rivers originating in the Himalayas, Andes and Rocky mountains will be severely reduced in summer and fall."

In light of the new data the authors believe that merely stabilizing CO2 emissions might not be enough to avoid catastrophic changes. "Humanity must aim for an even lower level of greenhouse gases", the report concludes.

To achieve these reductions they propose phasing out coal-fired power stations by 2030 and scaling down the use of unconventional fossil fuels like tar sands.

Reforestation programs on degraded land and instigating the widespread use of natural fertilizers could also help to draw down CO2 by around 50 ppm.

Dr Hansen says it's impossible to say when we will reach the point of no return.

"It's like the economy, it's a non-linear problem," he said. "You knew, given the continued input of big deficit spending that things would go to pot, but nobody could predict the time of collapse with any confidence. We had better start reducing emissions soon and get back below 350 ppm within several decades -- otherwise I doubt that the ice sheets can stand such a long strong pressure."

All About Nature and the Environment • NASA