WASHINGTON (CNN) -- The Bush administration cleared the way Thursday for federal agencies to skip consultations with government scientists when embarking on projects that could impact endangered wildlife, the interior secretary said. 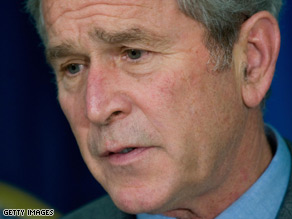 Environmentalists are not happy with President Bush's changes to regulations of the Endangered Species Act.

"The responsibility to initiate consultation will still lie with the federal agency undertaking the action," Interior Secretary Dirk Kempthorne said, but if the agency in question can satisfy the requirement that no harm will come to an endangered species, then there is no need to consult with either the U.S. Fish and Wildlife Service or the National Marine Fisheries Services.

The determination of "no harm" will rest with agency bureaucrats instead of scientists, but the agencies can still seek the input of the scientists on a voluntary basis, Kempthorne said.

Developers and agencies with large projects have long sought a weakening of Endangered Species Act regulations, which they say delay their projects and add to costs.

Environmental groups contend that this change will take scientists and biologists who have protected endangered species completely out of the mix, leaving wildlife more vulnerable and harder to protect. They also say that more than 250,000 citizens voiced their opposition to the measure through the Web site regulations.gov.

"The Department of Interior is ignoring the vast majority of the over 200,000 comments they got on this rule change-by moving forward. They are basically saying public be damned," said Andrew Wetzler, Director of the Natural Resources Defense Council's Endangered Species program.

The NRDC maintains that "absent court action, undoing this ruling could take months ... despite today's feel-good statements, we remain convinced that these changes are illegal."

The National Wildlife Federation, also voicing strong opposition, said that "in the eleventh hour of his presidency, President Bush has rammed through a sweeping overhaul of the Endangered Species Act. This action eviscerates key protections that have helped safeguard and recover endangered fish, wildlife and plants for the past 35 years.'

But Chris Paolino, a spokesman for the Interior Department, said that the change is an "attempt to refocus the resources, time and manpower of both the U.S. Fish and Wildlife Federation and National Marine Fisheries to focus on those projects that have a measurable, adverse impact on endangered species."

President-elect Barack Obama has said he would work to reverse the changes, but since they go into effect before he takes office, his administration would have to reopen the rulemaking process.

Congress could also act to block the new regulations.