Lawsuit seeks to halt gas and oil drilling in Utah

WASHINGTON (CNN) -- Seven environmental groups filed a lawsuit Wednesday against the federal Bureau of Land Management, hoping to stop the sale of leases to oil and gas companies on land in Utah that includes what some call the "world's longest art gallery." 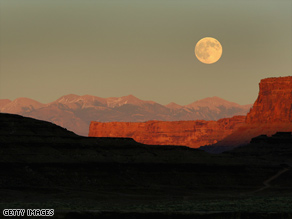 The government plans to make parts of Canyonlands National Park available to oil and gas drilling.

"The lawsuit challenges 80 lease parcels affecting some of the last and best places we have in this country," said Sharon Buccino, head attorney for the Natural Resources Defense Council, one of the groups that filed the suit.

The parcels that will be offered Friday in the agency's quarterly lease sale total about 110,000 acres, including parts of Arches and Canyonlands National Parks, Dinosaur National Monument and Nine Mile Canyon -- a place that has been called the "world's longest art gallery" because of its high concentration of prehistoric archaeological sites and rock art.

Rep. Brian Baird, D-Washington, said at a news conference announcing the lawsuit that "there is no place on Earth like what is at stake" in the lease sale.

"These are special places, places where you can hear for centuries. The silence overwhelms people who have not been there before," the congressman said.

The lawsuit and speakers at the news conference accuse the Bush administration of rushing the lease offers through without following protocol and called the sales "an early Christmas present to the oil and gas industry."

Actor and director Robert Redford, who spoke via satellite from Los Angeles, California, said the administration is "going behind our backs" to sneak the sales through before President-elect Barack Obama takes the White House.

"There's nothing new under the sun about this administration's attitude on the environment," he said. "How devious and secretive and basically, in my mind, morally criminal their behavior has been.

"They've been trashing the environment ever since they came in, almost as if they had a duty to do so," Redford added.

Land Management Director James Caswell has defended the selection of parcels to be leased in Utah, saying the plans authorizing the leasing were developed over seven years "and thus clearly were not rushed."

"The parcels to be sold have been carefully vetted for environmental impacts through a public process that included input from the National Park Service, resulting in the deferral of lease sales on parcels covering 83,000 acres," Caswell wrote in a letter to the Salt Lake Tribune in early December.

"These plans, which reflected voluminous public input and cooperation with both the state of Utah and county governments, substantially increase resource protections by limiting off-highway vehicle use and by tightening oil and gas leasing stipulations," he added.

Buccino said that despite those claims, drilling in the region could affect 3 million acres of public land.

"We're talking about the industrialization of the landscape. In addition to thousands of well pads, there'll be new roads, pipelines, power lines. Now it's wild and empty," she explained.

Buccino and Baird voiced confidence that the Obama administration would not let such sales go forward, and Redford praised the new president's nomination Wednesday of Colorado Sen. Ken Salazar as the next interior secretary.

"I think Salazar has already sent signals about how he feels about this, and he comes from a ranching family, so he understands the value of land," the actor said.

All About Bureau of Land Management • Utah • Robert Redford