LONDON, England (CNN) -- Experts are growing increasingly concerned that the United States will have to rely entirely upon Russia to take astronauts to and from the international space station for at least half a decade. 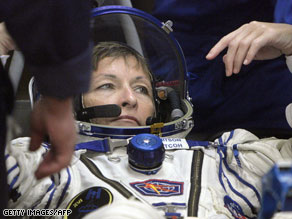 Observers say the situation is all the more worrying as earlier in the week, NASA announced a delay in the launch of its next-generation Orion spacecraft.

NASA's dependency upon the Russian Soyuz space capsules and rockets to carry astronauts to the station is the result of a five-year gap between the scheduled retirement of the shuttle in 2010 and the debut of its replacement in 2015.

The agency had hoped it could narrow this gap by accelerating the initial launch of the craft to 2013 but announced on Monday that because of inadequate funding and technical issues the new Constellation space program would not be ready for testing until September 2014.

While the new date is still within the March 2015 absolute deadline, many experts say NASA's reliance upon Russia to take astronauts into space has placed the agency in an unnecessary position.

"It is a vulnerability," John Logsdon, director of the space policy institute at George Washington University, told CNN.

"Any time you are relying on a single system to do a critical task, you are vulnerable if that system has problems."

"It is our fault for not having a replacement for the shuttle much earlier than Orion will be available. It puts Russia in a very powerful position," Logsdon said.

Russia will be the only country capable of providing human access to space not only for the Americans but also the rest of the world in the near future, said Howard McCurdy, a space expert at American University in Washington.

"It is like a monopoly position where you are at the mercy of that supplier," said McCurdy. "You don't want to be dependent on a single provider no matter who it is."

McCurdy warned that because the United States has positioned itself to be completely dependent on Russia to get humans into space until 2015, it may be harder for the American government to take diplomatic action against the country, especially in light of recent tensions between Russia and Georgia.

"That is a real concern," said McCurdy. "You are much more reluctant to be nasty with somebody who is a sole provider of an essential service.

"We have other international arrangements with them that could be jeopardized by our reliance on them," McCurdy continued. "Everything from their foreign relations with ex-Soviet states to their role in economic summits." Does NASA's dependence on Russia bode badly for U.S. space program?

For its part, NASA says it remains confident that diplomatic affairs between the two countries will not adversely impact the space agency's relationship with Russia.

"While it is possible that government to government issues could potentially have an impact on other aspects of a relationship between nations including cooperative space exploration activities, NASA has no reason to believe that it will be unable to rely upon Roscosmos-provided Soyuz vehicles for future ISS activities," spokesman Michael Curie wrote in an email statement to CNN.

The threat of a breakdown in diplomatic relations is not the only one hanging over NASA's space program.

The law bans the United States from buying space technology from Russia unless the president determines Russia is taking steps to prevent the proliferation of nuclear and missile technology to Iran.

Congress waived the ban in 2005, allowing NASA to enter into a $719 million contract with the Russians for use of the Soyuz through 2011.

NASA says it is currently renegotiating a new long-term contract for use of the Soyuz but, according to Nelson, the success of that contract could depend on whether or not lawmakers decide to approve the waiver again.

Election-year politics combined with increasing concerns about Iran and the ongoing crisis in Georgia all but guarantee that lawmakers will not vote for the exemption, said Nelson.

That means NASA could lose access to the $100 billion space station unless it continues to fly the shuttle or strikes some sort of deal with another space agency willing to put forward money for additional Soyuz seats, the Senator explained to CNN.

"It is a lose-lose situation," said Nelson.

"If our relationship with Russia is strained who knows if Russia will give us rides in the future?" Nelson continued. "Or if they give us rides will they charge such an exorbitant price that it becomes blackmail?"

Questions about the safety and reliability of the Soyuz have also been raised in recent months after two consecutive troublesome landings by space capsules, including one in April with American astronaut Peggy Whitson on board.

NASA has been working with Russian engineers to try to determine the cause of the dangerous descents but has so far failed come up with any concrete answers.

But NASA officials say the space agency still believes the Soyuz is a reliable transport system for its astronauts.

"We do not have concerns," NASA spokesman Rob Navias told CNN. "The Soyuz, which has been flying for decades now, is extremely reliable and is extremely capable."

"We have been partnering with the Russians for decades now for space flights."

The Russian Federal Space Agency, Roscosmos, could not be reached for comment on the matter.