(CNN) -- The Phoenix Mars Lander has entered a state of suspended operation called "safe mode" due to low power, mission managers said Thursday. And while they hope to recharge batteries and reactivate the spacecraft in the coming days, they say the rapid onset of the Martian winter means Phoenix's days are severely numbered. 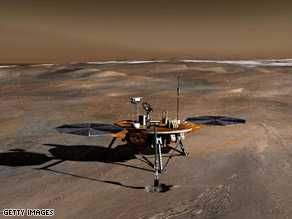 "This is a precarious time for Phoenix," Phoenix project manager Barry Goldstein of NASA's Jet Propulsion Laboratory said in a written statement.

"We're in the bonus round of the extended mission, and we're aware that the end could come at any time," he said. "The engineering team is doing all it can to keep the spacecraft alive and collecting science, but at this point survivability depends on some factors out of our control, such as the weather and temperatures on Mars."

The Phoenix team knew when they selected a landing site on Mars' arctic plain that the spacecraft would not survive a winter there, but they picked it anyway because satellite observations indicated there were vast quantities of frozen water in that area, most likely in the form of permafrost. They thought such a location would be a promising place to look for organic chemicals that would signal a habitable environment.

The spacecraft landed on May 25, and has conducted five months of research, scooping up soil samples for analysis in onboard scientific instruments.

Phoenix landed at mid-summer inside the Martian arctic circle where the summer sun never sets, so the solar-powered craft had plenty of power for the first few months of its mission. But temperatures have been dropping in recent weeks, as the nights get longer and winter weather sets in. Daytime high temperatures have only been about -50 Fahrenheit, dipping down to -141 at night.

In the coming weeks, the sun will set for the season and the long night of a polar winter will begin. Mission engineers say that, with no sunlight reaching the solar panels, the spacecraft will die.

Eventually, snow and advancing polar ice will completely cover Phoenix. Mission managers say they may attempt to reactivate it after next spring's thaw, but caution that it is extremely unlikely such efforts would be successful.

Researchers have not found the organic chemicals they were seeking in the soil, though they did gather a lot of information about its chemistry. Science team members say they will be sifting through the data for months, if not years.

NASA's next mission to the red planet is the Mars Science Laboratory, a large, nuclear-powered rover designed to traverse long distances carrying a suite of onboard scientific instruments. It is scheduled to launch next summer, though ongoing technical problems may require a postponement to 2011.

All About NASA • Phoenix Mars Lander