KENNEDY SPACE CENTER, Florida (CNN) -- NASA said Saturday that the day-old mission of space shuttle Endeavour, which is carrying seven astronauts to the international space station, is going smoothly despite problems with a lost thermal blanket and a malfunctioning antenna. 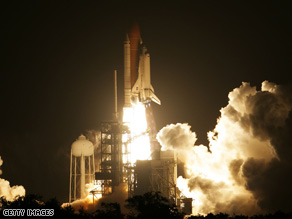 Launch director Mike Leinbach said that, on Day 2, the mission is going "extremely well" after a flawless takeoff and ascent during a rare nighttime launch Friday.

A piece of thermal blanket came loose from the shuttle shortly after launch, mission managers say. The blanket was about 4 inches wide and 12 to 18 inches long, and managers say it came from an area that is "not of great concern" in terms of protecting the shuttle during the intense heat of takeoff and re-entry into Earth's atmosphere.

Aboard Endeavour on Saturday, astronauts Eric Boe, Don Pettit and Shane Kimbrough were using the shuttle's robotic arm to look at its wings and nosecap to check for damage to the thermal-protection system. Those areas are the most vulnerable to heat damage.

It was a gash on the wing of space shuttle Columbia that caused its destruction and the deaths of seven astronauts during re-entry February 1, 2003.

The shuttle's other problem involves a balky antenna that could affect radar and communications. NASA's Leroy Cain said that the problem would affect the mission's ground crew more than the astronauts and that it most likely came from problems with a software upgrade.

If the radar is affected, the crew will have to use a different method of rendezvous with the space station.

While there, the astronauts will increase the station's living space with room for six instead of the current three. They'll install more places to sleep, another bathroom, a better water system, more exercise equipment and a bigger refrigerator.

The population on board the space station is to grow to six next spring.

Also on tap are four space walks focusing on the station's two Solar Alpha Rotary Joints, which allow the solar panels to track the sun.

The shuttle is also bringing Thanksgiving dinner, with irradiated turkey, candied yams, stuffing and dessert, because it won't be returning to earth until November 29.

Flight engineer Greg Chamitoff will return to earth from the station when Endeavour returns at the end of the month, leaving mission specialist Sandra Magnus to take his place.

All About Space Shuttle Endeavour