(CNN) -- German astronomers say they have discovered conclusive proof of a supermassive black hole at the heart of the galaxy. 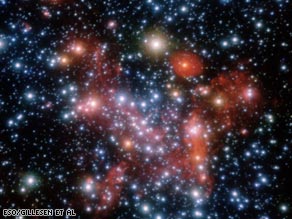 The center of the galaxy is a "unique laboratory" for astronomical study.

The 16-year study involved tracking the movement of 28 stars at the center of the Milky Way using telescopes at the European Southern Observatory in Chile.

Using the data collected, astronomers were able to calculate important properties about the black hole -- called Sagittarius A* -- such as its size and mass.

Professor Reinhard Genzel, who led the study at the Bavaria-based Max-Planck Institute for Extraterrestrial Physics, said the data collected proved the existence of the black hole "beyond any reasonable doubt."

"Undoubtedly the most spectacular aspect of our long term study is that it has delivered what is now considered to be the best empirical evidence that super-massive black holes do really exist," said Genzel. The black hole had a central mass concentration of four million solar masses, he added.

The study also enabled astronomers to calculate the distance of the earth from the center of the galaxy, now measured to be 27,000 light-years, and enhanced by six times the accuracy to which they were able to measure the positions of stars -- the equivalent of seeing a one euro coin from a distance of 10,000 kilometers (6,214 miles).

One star, called S2, orbited the center of the Milky Way so quickly that it completed one full revolution within the duration of the study.

Genzel said the center of the galaxy was a "unique laboratory" for the study of the strong gravity, stellar dynamics and star formation with a level of detail "never possible beyond our galaxy."

Stefan Gillessen, the chief author of the study, published in the Astrophysical Journal, said: "The Galactic Center harbors the closest supermassive black hole known. Hence, it is the best place to study black holes in detail."