(CNN) -- Flamboyant and fearless, Roberto Cavalli is the peacock of the fashion world; with his body-hugging clothes, he woos women the world over. 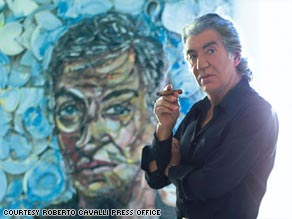 But his clients are no dainty damsels: Cavalli's women are Amazonian warriors and Grecian goddesses, whose armor is fashion and whose weapon is sex. His colorful creations are unabashed celebrations of the female form: dresses slashed to the hip or barely skimming the buttocks, necklines that plunge where no other designer dares.

Cavalli's woman knows she looks fabulous, and isn't afraid to show it: to her, it's not just clothing, it's an announcement that she's arrived.

Born in Florence in 1940, Cavalli was immersed in an intensely creative environment from childhood. That influence came from his father, a tailor, and his artist grandfather, Giuseppe Rossi, whose work is shown in the famous Uffizi Galleries.

Following in his father's footsteps, Cavalli studied textile design at the local art institute. By the early 70s, he had developed an innovative technique for printing on lightweight leather, and his Florentine flair had led to commissions with Hermes and Pierre Cardin.

In 1970, he presented his first namesake collection at the Salon for Prêt-à-Porter in Paris. His trademark work with unconventional fabrics like embellished denim and leather, mixed with wild animal prints and exotic patterns, was embraced by the jet set and Cavalli opened his first boutique in Saint Tropez in 1972.

Cavalli married his wife, Eva Duringer, a former Miss Universe, in 1980; she is now his business partner and right-hand woman.

His fondness for bright color, exotics, fur and bold prints -- which he designs in his factory on the outskirts of Florence -- have won him a name as the king of fashion excess. Beloved by A-listers and pop princesses, these are not clothes for the shy: this is old-school glamour, infused with power, wielded by women who have flounced and shimmied their way to the top.

See Cavalli's designs on the catwalk »

His main line is sold in over 50 countries worldwide, along with his diffusion lines RC Menswear and Just Cavalli, plus a children's line, knitwear, accessories, eyewear, watches, perfumes, underwear and beachwear. He's even ventured into Cavalli-branded vodka and wine.

His collaboration with high-street fashion store H&M in November 2007 caused stampedes as his fans flocked to get their hands on his creations, desperate to capture some of that Cavalli magic at tiny prices.

Some have asked whether his latest collections have taken a more gentle direction -- but the tiger's inner fire still burns bright. Spring/Summer 2008's bold flower prints and flirty feathered dresses were followed by Autumn/Winter 2008's flowered dresses that at first glance appear dewy and fresh -- but look closer, and the hip-hugging cut belies their innocence.

If anyone sums up the glamour and glitz of show business, it's Cavalli: fashion as theatre, shameless decadence where the whole world is a stage. That's underlined by his eponymous 133'9" long yacht, built 2004, and color-coordinated, naturally, with his helicopter and fleet of cars.