(CNN) -- Just like those petite waifs that glide effortlessly down the Rue de Rivoli, seen at first-hand the beauty of Paris can be breathtaking. 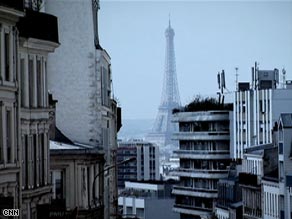 The Eiffel Tower is one of the world's most iconic buildings and is just one of the city's many highlights.

Yet like those same Paris ladies who wear their hauteur like a badge of honor, the city is not without its dark side.

In recent years the French capital has had its elegant facade ruffled by an explosion of discontent among the city's disenfranchised underclass.

Young men -- many the offspring of North African immigrants -- angry at the lack of opportunities and perceived racism from state institutions have taken to the streets, fighting violent pitched battles with police.

All this has happened in the city's ghettoized suburbs -- the banlieues. If you stay in the pristine center, you'd never know it was going on.

The ugly high-rises of the unkempt banlieue are a world away from the tourists' Paris: a timeless masterpiece of tree-lined boulevards, majestic architecture and white-aproned waiters uncorking bottles of Bordeaux.

The city's abundant charms give it a unique ability to bring out the romantic side of even the most world weary.

Winding your way along the banks of the Seine near Notre Dame on a spring day can feel like being in beautiful day dream.

Of course, you might find the illusion comes crashing down around you when you sit down at a cafe and discover the rudest man on the planet disguised as your waiter. But what would Paris be without those famously haughty Parisians, regarding you with thinly veiled contempt when you try to order "deux billet pour le metro" in a bad French accent?

For all its classical beauty the city center is actually a fairly modern creation.

The cramped and disease-ridden streets of medieval Paris were torn down in the 19th century. The work commissioned by Napolean III and supervised by the urban planner Baron Georges-Eugene Haussmann transformed the center into the city of wide boulevards and grand squares that you see today.

Haussman's Paris might look like the set from a sumptuous period drama but it's not untouched by the modern.

Competing for space alongside the Eiffel Tower on the Paris skyline, is the post-modern strangeness of the Pompidou Center and the sleek glass arch at La Defense.

These modern creations don't get the approval of all Parisians or of the tourists, and you sometimes get the impression contemporary Paris is slightly stifled by its past -- a victim of its own beauty.

Of course there's only one way to contemplate this and the many other questions the city raises. That's with a cafe au lait in hand, seated at a terrasse watching the world, and the waifs go by.