Berlin: What to see

(CNN) -- Berlin is a city that exists in the tension between its once glorious, and often dark, past and its relentless drive to reinvent itself. This becomes evident if you take the time to explore the city on foot. 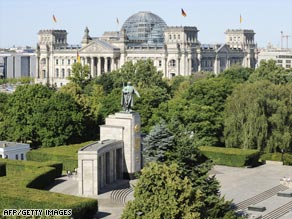 Berlin is filled with monuments to its past.

There's no finer tribute to the golden age of Prussian power than the majestic Brandenburg Gate, now a symbol of a unified Berlin after years spent in the no-man's-land on the eastern side of the Berlin Wall. To its west is the Tiergarten park, the largest of the many green spaces in Berlin, and nearby is the Reichstag building, topped by British architect Norman Foster's glass cupola, a striking example of the city's ability to blend old and new. It's worth queuing for a trip to the top, which affords a 360-degree view of the city.

Originally erected opposite the Reichstag building, the Siegessäule victory column now stands at the Grosser Stern crossroads in the Tiergarten. Built to commemorate the triumphs of the Prussian army, the Roman goddess of victory surveys the city from its summit.

Not to be missed is Museumsinsel (Museum Island), a patch of land in the Spree River that is a UNESCO World Heritage Site by virtue of its outstanding collection of museums. Among its highlights is a recreation of the Ishtar Gate of Babylon, in the Pergamon museum.

A reminder of the darkest chapter in Berlin's history is the Memorial to the Murdered Jews of Europe, one block south of the Brandenburg Gate. Undulating paths lead through 2,700 gray columns of varying height, making a visit to the memorial a suitably unsettling experience. You can learn more about Berlin's Jewish heritage at the Jewish Museum (Lindenstrasse 9 - 14). With stunning architecture and a wealth of exhibits, it's a fascinating place.

Another era etched into the memory of Berliners is the years in which it was divided by the Berlin Wall. The Mauermuseum (Friedrichstrasse 43 - 45) by Checkpoint Charlie is dedicated to the subject, but more interesting is the East Side Gallery in Mühlenstrasse. Spanning 1.3 km, this is the longest stretch of the Berlin Wall still standing and it is covered in graffiti and murals painted in the euphoric aftermath of Berlin's unification.

For a taste of life in the former East Berlin marvel at the imposing buildings that line Karl-Marx-Allee or visit the DDR Museum (Karl-Liebknecht-Strasse 1) for a hands-on experience of the minutiae of daily life in the GDR. Here you can handle everyday memorabilia, sit in a classic Trabant and watch TV in a lovingly recreated East German sitting room.

The modern face of Berlin is well represented by the futuristic architecture of Potsdamerplatz, the recently opened Berlin Hauptbahnhof railway station (the biggest two-level station in Europe), the bars and boutiques of the Mitte and Prenzlauer Berg districts and, of course, Berlin's legendary techno clubs.