COPENHAGEN, Denamrk (CNN) -- What makes someone decide to become an actor? It sometimes seems as if the average Hollywood star is motivated mainly by the promise of a fat pay check. 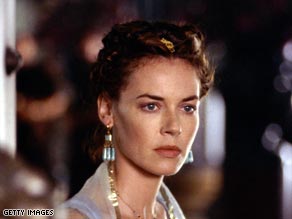 Or perhaps they're drawn to the celebrity lifestyle. Maybe they crave the love of an adoring public, or perhaps they see the movies as a way to leave their mark on the world, to be immortalized on celluloid.

For Danish actress Connie Nielsen it was something quite different. For her, being an actor means being an outsider. "As an artist you actually do have to make a choice to be an outsider. If you're an outsider you have the freedom to say what people on the inside don't dare to say," she told CNN.

So Connie Nielsen is not your typical movie star. As a 5-foot-10-inch blonde Scandinavian beauty she has the looks of a classic silver screen siren, but she has steadfastly resisted a career as Hollywood eye candy and rejected the lifestyle that goes with it.

Raised in Elling, a small coastal village in Denmark, she is fluent in seven languages and studied acting in France and Italy, making her screen debut in French comedy "Par Où T'es Rentré? On T'a Pas Vu Sortir" (U.S. title "How Did You Get In? We Didn't See You Leave") in 1984.

She appeared in more French and Italian movies before landing a role opposite Al Pacino and Keanu Reeves in "The Devil's Advocate" in 1997. But it wasn't until 2000, when she was cast in Ridley Scott's Oscar-winning "Gladiator", that Nielsen landed a role that really let her show her acting ability.

As Lucilla, the sister of the villainous Emperor Commodus, Nielsen brought some much-needed subtlety to the swords-and-sandals epic and held her own sharing the screen with Joaquin Phoenix and Russell Crowe.

The movie made Nielsen an international star and she scored other successes with "One Hour Photo" in 2002, and "The Hunted" in 2003. But while the success of "Gladiator" opened doors for her, it also meant she had to fight the kind of typecasting that would try to limit her to playing "the love interest" to a male lead who got all the good lines.

Nielsen has in the past been critical of Hollywood for its lack of female roles, saying "you think once you've shown what you can do, and your movies have been successful, that snap, you work. So to discover the difference between guys' roles and girls' roles made me plain mad. It's unjust."

But Nielsen has refused to be pigeonholed, seemingly drawn to difficult roles in controversial movies. She appeared in French movie "Demonlover", which dealt with pornography, violence and corporate amorality, while more recent films have taken on the wars in Afghanistan and Iraq.

Danish drama "Brødre" (U.S. title "Brothers") is about a soldier who returns from Afghanistan a broken man, unable to communicate his experiences from the conflict. Playing his wife, Nielsen put in a powerful performance that won her awards and served to highlight how Hollywood had underused her talents.

"The Situation" in 2006 was billed as the first film to be made about the Iraq war and told the story of ordinary Iraqis caught up in the conflict, while "Battle of Seattle" examined how peaceful protests erupted into riots when the World Trade Organization met in Seattle in 1999.

Of her choice of subject matter, Nielsen says that rather than making a political point she is trying to show the human aspects of the conflicts.

But Nielsen makes it clear that her career is not the focus of her life and she stresses the importance of making time outside the movies. She is passionate about literature and art and she is currently dating Lars Ulrich, drummer of rock group Metallica. She had a son with him in 2007 and has another son from a previous relationship.

Perhaps her commitment to her art, her interest in social issues and her disavowal of fame simply reflect her Danish upbringing, but there's no doubt that compared to many other Hollywood stars Connie Nielsen is a breath of fresh air.