Connie Nielsen: Inspired by the city of her dreams

COPENHAGEN, Denamrk (CNN) -- Actress Connie Nielsen hit the big time when she starred in "Gladiator" as Lucilla, sister of the deranged Emperor Commodus. Since then she has appeared in hit movies including "One Hour Photo" and "The Hunted". 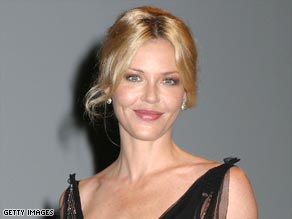 But Nielsen has refused to play the Hollywood fame game and seems drawn to challenging roles in controversial movies, including "The Situation", about the current Iraq war, and "Battle in Seattle", about the anti-globalization riots that took place in Seattle in 1999.

Nielsen now lives in the US and returns to Copenhagen every year. She talks to My City, My Life about what makes the city, and its people, so special.

CNN: How do you define yourself?

I try to combine my work with my family, that's what I aspire to. I don't say that's the only thing. It's not all work and family, because otherwise you would be saying no to the many other things in life and there are many other things.

CNN: The people here are supposed to be incredibly happy -- what do you think?

Connie Nielsen: I think it's funny in a way because when I grew up here it was very unusual to hear the word "happiness". If you asked somebody, "what do you wish for in life?" they wouldn't say "happiness."

I would have answered "excitement, knowledge," God knows -- I mean, many, many different things, but certainly not "happiness". It seemed like a foreign concept to wish for something that specific and that singular. And I think that a lot of Danes kind of feel like that about being the happiest people in the world.

CNN: Is there anything you'd like to change about the city?

Connie Nielsen: Anywhere there are social buildings that stuff people into boxes, concentrate poor people there. It's specific to any big city. There was an effort to create buildings that concentrate these people very closely, and their social problems. They are still around in New York, Paris, London and here too.

So if I could change anything about Copenhagen, or any other major big city, I would change the way we build buildings or housing for lower income people. I don't think people who are already burdened with social, economic, psychological situations, dysfunctional families, need to be burdened with other people with the same problems.

CNN: Is the city politically driven?

Connie Nielsen: I don't think I can remember a moment in my life where people didn't discuss politics. People discuss politics at the table. I think some of the first information I received was politically charged (laughs). It was at a time when girls were being told, "Why don't you go and learn how to repair machines rather than learn to repair your jumper? Why don't you learn to cut wood rather than learn to keep a house clean?" in school.

It was to make us conscious of what we were, how we defined ourselves and why you would accept one concept of yourself rather than another. Have you searched through the truth of that concept? Have you deconstructed? Have you made sure that its foundations are valid? That's how I grew up and I think it was wonderful.

CNN: How would you describe the city architecturally?

Connie Nielsen: It's everything here from very late renaissance to this 19th century golden age we had here. It's that, intermixed with pure Danish modernism. I love the juxtaposition of it all. I love when we bring in metaphors for our past as well.

CNN: A lot of the places you have taken us to have been very romantic, do you think there is a fairy tale quality to Copenhagen?

CNN: What is it about the city that makes people creative?

Connie Nielsen: Well, we have a very, very long winter and it gets a little boring, so you better think of something to do! It can get deathly boring, so you start using your imagination. Sometimes it's necessity that produces it, because you need to do something.

CNN: Is there something about the people here that want to change things for the better?

CNN: Do you take any inspiration from the city?

CNN: You've lived in lots of cities all over the world and still do. Why is Copenhagen special to you?

Connie Nielsen: I was born here and it's the capital of my home country. It's also immensely beautiful. Many of my friends live here and much of my partner's family lives here too and so we bring our kids back here every year.

It holds all the museums that hold our history, our culture, and I take our children there and I go there for my own pleasure all the time. I love going to museums.

I love this city and I love cities that are on the water. I love the water element, specifically the sea. I grew up on the sea and I grew up sailing -- I love sailing -- and the presence of the sea gives the air and the light a very special quality that I absolutely adore.

CNN: It seems that for a small place it has a lot of cultural influence.

Connie Nielsen: Yes, it's sort of a little pearl in the middle of the seas. There's a lot of traffic through this place, from the east, west, north and south. And we are the southern part of the north, so everything from the south comes up here on its way towards the north, and the opposite. And it has left its mark.

CNN: If Copenhagen was a person, how would you describe it?

Connie Nielsen: If Copenhagen were a person, that person would be generous, beautiful, elderly, but with a flair. A human being that has certain propensities for quarrelling, filled with imagination and with appetite for the new and with respect for the old -- somebody who takes good care of things and of people.