Copenhagen: What to see

(CNN) -- Copenhagen is compact and relatively traffic-free, making it a pleasure to explore on foot. Start your visit Start in Indre By, the bustling and historic heart of the city. 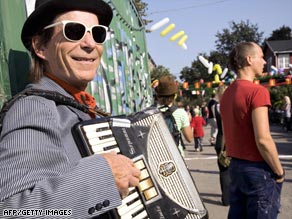 The 'free city' of Christiania is colorful and eccentric.

Although often described as the longest pedestrianzed street in Europe, Strøget is actually a series of connected streets. Stroll alongside the locals, checking out the street entertainers and boutiques and try not to let your credit card run away with itself.

Make a detour into the Latin Quarter, with its winding streets and historic buildings. The Rundetaarn (Round Tower -- Købmagergade 52) was built in the 17th century and still functions in its original role as an observatory. A wide, rising corridor leads to the top for a fantastic view of the city.

At the eastern end of Strøget is Kongens Nytorv. This expansive square is home to the Royal Theater and Charlottenborg Palace. Its glass-fronted cafés make an excellent spot to take a breather, but if you can hold out, just off the square is Nyhavn, the colorful facades of its medieval buildings providing the perfect backdrop for its harbor-side cafés.

Take the Knippelsbro bridge across the Inderhavnen (inner harbor) to reach the delightful little island of Christianshavn. Its canals and picture-postcard houses have earned it the moniker of 'Little Amsterdam' and its skyline is dominated by the spiraling black and gold spire of the Vor Frelsers Kirke church (Sankt Annæ Gade).

The island is also home of Christiania, the 'free city' that has been populated since 1971 by a community of various dropouts, artists and hippies. An incongruous mix of former army barracks and colorful, ramshackle homes, the mural-lined dirt streets make an interesting detour from the ordered architecture of Copenhagen proper.

Visible across the Inderhavnen is Amalienborg Slotsplads, a regal square surrounded by the four Amalienborg palaces, the royal family's winter residence. You can watch the changing of the guard each day at noon.

Nearby is Kastellet, a star-shaped fortress that has housed by troops since 1660, and just beyond, on the Langelinie coastline, is the small bronze statue of the Little Mermaid. In reality, this tribute to a Hans Christian Andersen fairy tale is somewhat disappointing, but it remains hugely popular and is an inevitable box to tick on any visitor's itinerary.

Rosenborg Slot is a former royal residence surrounded by a moat in the peaceful setting of Kongens Have (The King's Garden), the city's oldest park, and the nearby Botanisk Have (Botanical Gardens) are a pleasant location for a summer stroll.

Copenhagen also has some superb cultural treasures; be sure to visit the Nationalmuseet (Frederiksholms Kanal 12), which includes a fascinating collection of ancient objects that have survived, preserved in Denmark's peat bogs, and a stunning array of Viking artifacts.

The Statens Museum for Kunst (National Gallery, Sølvgade 48 - 50) has a vast collection representing 700 years of European art, but even more impressive is Ny Carlsberg Glypotek, with its glass-domed Winter Garden, impressive collection of ancient sculpture and a wing devoted to French artists from the 19th and 20th centuries.

End your stay with a trip to Tivoli Gardens. These pricey pleasure gardens in the centre of town may not match bigger amusement parks in terms of thrill rides, but they have bags of charm, fairytale landscaped gardens, a lake, theatres and concert halls. In summer Tivoli stays open until midnight and as dusk falls lanterns twinkle into life and the atmosphere becomes almost magical.

Do you agree with our Copenhagen picks? Send us your comments and suggestions in the "Sound Off" box below and we'll print the best.