(CNN) -- If the bustle and stress of city life is getting too much for you there are some fantastic places away from central London where you can unwind. The London Wetland Centre in Barnes is a 43-acre wetland reserve and an oasis for all manner of rare birds and wild flowers. 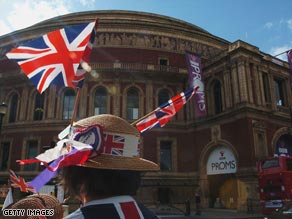 The Proms classical music concerts are held at the Royal Albert Hall.

The Royal Botanic Gardens, usually known as Kew Gardens, spreads out over 300 acres between Kew and Richmond in south-west London. Elegant botanical glasshouses are filled with exotic fauna and a new treetop walkway lets you roam among the canopy of a woodland glade. Look out for the curious follies scattered about the grounds, including a 10-story pagoda.

The largest of London's royal parks is Richmond Park, famous for its population of more than 600 free-roaming red and fallow deer. The park is perfect for a summer's stroll or picnic -- although visitors should be warned that some of the deer have acquired a taste for sandwiches ....

One of the city's more unusual and better hidden treasures is the biggest Hindu temple outside India. Incongruously tucked away in Neasden, the Mandir is a stunning white edifice built from 3,000 tonnes of Bulgarian limestone and 2,000 tonnes of Italian marble, meticulously carved in India by a team of 1,500 sculptors. The result is an exquisitely detailed and beautiful piece of India -- in north-west London.

Be warned: a single-stop tube journey in central London costs $8 (£4). You can save money by buying an Oyster card, which can be used on London's underground, buses, trams and some overland rail services.

It's available from most Tube ticket offices and for a £3 returnable deposit you'll get a pre-payment card that you can top up using cash or a credit card. Using an Oyster card you can travel in central London for £1.50 per journey, with various reduced rates for other journeys.

Alternatively, you'll see more of the city, and avoid the rush-hour crush, by traveling on foot. For short journeys you may even save time by avoiding the Tube, and you'll find out just how close together many underground stations are.

Changing of the Guard

If you're not in London for June's Trooping the Colour, you can still get a taste of traditional royal pomp by watching the Changing of the Guard. Each day at 11 a.m. the Queen's Guard marches along the Mall from St James's Palace to Buckingham Palace, accompanied by a full military band.

To hear first rate classical music on the cheap, head to the Royal Albert Hall during the Proms. A feature of this summer season of classical concerts is "Promming tickets" -- standing tickets that cost just $10 (£5). You don't even need to book ahead as 500 of these tickets can be bought only at the Royal Albert Hall on the day of the performance -- just be sure to get there early.

What are your tips for a great stay in London? Where have you found the "real" London? Send us your suggestions in the "Sound Off" box below and we'll print the best.