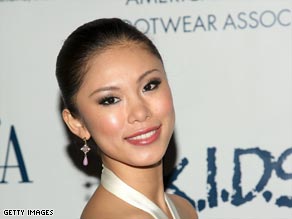 Riyo Mori is a trained ballet dancer and plans to open her own dance school.

Mori was born on December 1986 in Shizuoka, Japan. Her mother is a dance instructor and Mori began dancing when she was four, soon showing she had inherited her mother's ability.

While her mother taught jazz dance, tap dance and modern dance, Mori chose ballet as her own medium, and when she was just 16, Mori moved to Canada to study at Quinte Ballet School of Canada.

She was set to continue dancing at the Broadway Dance Center in New York, when her grandmother convinced her to enter the Miss Universe beauty pageant. Mori traveled to Mexico City in May 2007 and beat 76 other contestants to claim the coveted Miss Universe crown.

After being named Miss Universe, Mori's life became one of airports, interviews, photoshoots and TV appearances. She has traveled the world as a goodwill ambassador and supported numerous charities. Mori says of herself, "I think I have a samurai soul. I'm very patient and I can serve others."

In July 2008, Mori traveled to Vietnam to pass on her crown to Miss Universe 2008, Dayana Mendoza of Venezuela.

Mori says that dancing is her true love, adding "dancing is great because this is how I express myself -- this is where I learn how to be confident." But she has shown an interest in acting, auditioning for a role in U.S. TV series "Heroes," and it may be that Mori will one day swap Tokyo for Hollywood.

Mori still dreams of dancing on Broadway and has plans to open a dance school, saying "I want to teach the young generation, through dancing, how to be positive, patient and happy. These three things are very important to me." Still only 22 years old, you get the feeling that anything is possible for this beauty queen with "a samurai soul."