(CNN) -- Tokyo was known as Edo until 1868, but it's hard to imagine that this high-rise, high-tech metropolis could possibly have existed in a time before electricity and concrete. Tokyo isn't just a futuristic city; it's the place that has shaped our vision of what the future will look like. 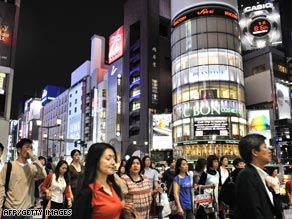 In Tokyo, the future is a long-standing tradition.

There's a sci-fi familiarity to areas like Shibuya, Shinjuku and Akihabara; the skyscrapers glowing with illuminated signs, subway stops inside shopping malls and taxis with automated doors could be straight out of "Blade Runner" or "The Fifth Element."

But the space-age topography of Tokyo has been shaped by a history of catastrophe. In the 20th century alone Tokyo suffered earthquakes, fires and devastating bombing. The result is a city that has repeatedly been forced to rebuild, shedding its past with each successive redevelopment. In Tokyo, the future is a long-standing tradition.

After centuries of expansion, Tokyo has grown vertically to accommodate its 12 million residents. Perhaps the inevitability of another catastrophic earthquake accounts for the lack of emotional attachment to the city's architecture; buildings are continuously being pulled down and replaced, creating the sensation that Tokyo's skyline is a permanent work in progress.

While it can seem that the city is intent on stream rolling over its past, you can still see traces of old Edo. The Meiji Jingu Shrine tells of the city's Shinto heritage and there's something timeless about the charming chaos of Tsukiji Fish Market. Even the enduring formalities of Tokyo's social etiquette and the joy with which Tokyoites greet the coming of the cherry blossom are signs that the city maintains a lingering affection for its traditions.

At first glance, Tokyoites may seem sober and industrious, efficiently going about the business of making their city a world capital of techno commerce, but shops filled with manga comics and anime DVDs hint at a desire to escape the obligations of real life. That appetite for escapism is most colorfully expressed in the phenomenon of "cosplay", which sees teenagers dress as characters from cartoons and comic strips, or in the outlandish uniforms of various distinctive subcultures.

In the 80s, Japan's bubble economy created unsustainable growth in Tokyo and property prices in the capital went through the roof. When the bubble burst in the early 90s, Tokyo was hit particularly hard but, after years of recession, Tokyo has the buzz of a city regaining its confidence. For this endlessly fascinating city, it's back to business -- and back to the future.