Seattle: Where to stay

(CNN) -- There's a good range of accommodation in Seattle, with an emphasis on hotels geared towards the business traveler. With Microsoft's HQ based just across Lake Washington, Seattle has long been at the forefront of new technology and unlike most cities, many of its hotels offer free wi-fi. 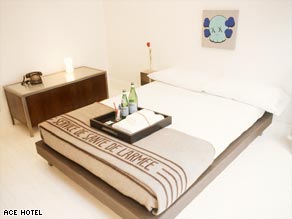 It's rare to find a hotel that delivers on personality and value quite as well as the Ace Hotel (2425 First Avenue, $95 for standard double without bathroom, $175 for deluxe double with private bathroom). Rooms are pristinely white, furnishings minimal and the atmosphere arty. It may not be the height of luxury, but it is very, very cool.

More upmarket is the Sorrento Hotel (900 Madison Street, doubles from $249), which offers classic elegance and rooms with individual décor. While you're there, treat yourself to a shiatsu massage or dine at the charmingly old-school Hunt Club or the Fireside Room, which retain the feel of an exclusive members' club.

If the Sorrento sounds a little too old-world, Hotel 1000 (1000 First Avenue, doubles from $199) is a technological utopia that will appeal to gadget nuts. Rooms have infrared sensors that detect body heat, so that staff don't accidentally walk in on guests, and there's a virtual golf club in the basement that lets you simulate a round on 50 of the world's most famous courses.

If you're impressed enough to make a return visit, you'll find your profile and preferences have been digitally stored, meaning your room will be pre-heated to your favored temperature for your arrival.

For travelers who can't bear to be parted from their pooches, the Alexis Hotel (1007 First Avenue, doubles from $209) is the perfect choice. Canine guests are provided with their own designer bed and a doggie menu, for in-room dining. Hotel staff will even dog sit while you explore the city, and just in case you're feeling left out, there's a steam room and spa, strictly for Homo sapiens. What's more, the Alexis was refurbished last year, so it looks spanking new.

For spectacular views over Puget Sound and the Olympic Mountains, splurge on a room at the Edgewater Hotel (Pier 67, 2411 Alaskan Way, doubles from $250). As the name suggests, it's located right on the waterfront of Elliot Bay, just a few blocks from Pike Place Market. Rooms are luxurious and a roaring fire adds to the Northwestern coziness, but the chances are you'll be to busy gazing out across the bay to even notice.

Do you agree with our Seattle picks? Send us your comments and suggestions in the "Sound Off" box below and we'll print the best.