Quincy Jones: The beat goes on

(CNN) -- It's difficult to overestimate Quincy Jones's contribution to American music. Over the last 60 years he has excelled as a musician, composer, record producer, arranger, conductor and media company executive. 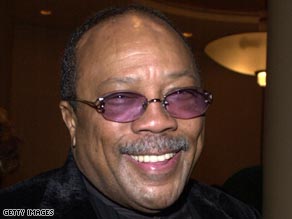 Quincy Jones has won 27 Grammy awards during his extraordinary career.

In a career studded with landmarks, Jones produced Michael Jackson's multi-platinum albums "Off The Wall," "Bad" and "Thriller" -- the best selling album of all time -- and produced and conducted "We Are The World," one of the biggest-selling singles in history.

Quincy Delight Jones Jr., known to his friends as "Q," was born on March 14, 1933, in Chicago. He moved to Seattle as a child and began playing trumpet aged 12. When he was 14 he befriended a young Ray Charles, who taught him how to arrange music, and Jones was soon playing bebop in nightclubs, backing up the likes of Billie Holiday.

In 1951, Jones won a music scholarship at prestigious Schillinger House, in Boston, but he abandoned his studies to tour with bandleader Lionel Hampton. By the mid-50s, he was arranging and recording for the likes of Sarah Vaughan, Duke Ellington and his old friend Ray Charles. In 1956 he toured with Dizzy Gillespie's Big Band, recording his first album as a leader in the same year.

In 1957, Jones moved to Paris to study music composition and theory, taking a job with Mercury Records' French distributor to pay for his studies. After a European tour proved a financial disaster, the president of Mercury offered him a position at the record label and Jones soon became vice-president at the company.

In the 60s, Jones worked as a conductor and arranger for Frank Sinatra and Ella Fitzgerald. He also began scoring music for films, including "In the Heat of the Night," "In Cold Blood" and "The Pawnbroker," which featured his hit "Soul Bossa Nova," later re-used as the theme to the "Austin Powers" movies.

Jones would go on to score 33 movies during his career and he also composed the themes for TV shows such as "Ironside," "The Bill Cosby Show" and "Roots," which earned him an Emmy award. Having made his name as a composer and arranger in the 70s, he moved away from jazz to record a series of hit albums of his own soulful music.

Jones's career was dramatically put on hold in 1974, when he suffered a severe aneurysm, but it did little to stall his incredible drive. In the 80s, as well as producing three Michael Jackson albums and "We are the World," he co-produced and scored the Steven Spielberg movie "The Color Purple," and formed multi-media company Quincy Jones Entertainment. In his role as CEO he was executive producer of TV series "The Fresh Prince of Bel Air" and published "Vibe" and "SPIN" magazines.

His 1989 album "Back On The Block" won Album Of The Year at the Grammys and 1993's "Miles and Quincy Live At Montreux", featuring Jones conducting Miles Davis, earned another Grammy. All in all, Jones has won 27 Grammys, been nominated for seven Academy Awards, and has added to his business interests with Quincy Jones Media Group and Qwest Broadcasting.

Perhaps because of his own upbringing in tough neighborhoods in Chicago and Seattle, Jones has long been involved in social activism. He supported Martin Luther King's Operation Breadbasket, which promoted economic development in the inner cities, and worked on Reverend Jesse Jackson's People United to Save Humanity project.

Jones founded the Listen Up! Foundation, which has worked on youth projects in Los Angeles and South Africa, and he helped launch the We Are the Future project, which helps children in poor and conflict-ridden areas. He is also one of the founders of the Institute for Black American Music (IBAM), which raises money to establish a national library of African-American art and music.

Over the course of his incredible career, Jones somehow found the time to marry three times and father seven children. In 1990, his life was chronicled in the movie "Listen Up: The Lives of Quincy Jones" and in 2001, Jones published "Q: The Autobiography of Quincy Jones."

Of his own career, which has taken him from being a teenage musician in the clubs of Seattle to a world-famous music mogul, Jones says, "You have to turn all of your drunken dreams into sober realizations. I think I was blessed with the ability to see things and make them happen before everybody else saw them."