SEATTLE, Washington (CNN) -- Quincy Jones moved to Seattle as a child and discovered a passion for music that would bring him global success as a musician, composer and producer. He talks to CNN about music, working with Michael Jackson, and the city he grew up in. 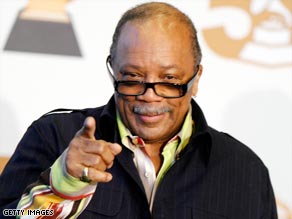 Quincy Jones: "You have to believe and trust yourself."

CNN: How would you describe Seattle?

Quincy Jones: Seattle is like a global gumbo, a melting pot with all kinds of people -- the rich, the poor, white people, some Chinese, Filipino, Jewish and black people -- they're all here.

CNN: What was it like when you first arrived in the city?

Quincy Jones: It was diametrically opposite to where I'd come from. I was born into a black ghetto in Chicago, during the depression. Where we came from, there were machine guns, there were gangsters everywhere.

At 11 years old we broke into a building to get some lemon meringue pie. As we were leaving, I spotted a splendid piano in the corner. I put my hands on the piano and somehow every cell in the body, everything in me knew that's what I would be doing for the rest of my life. It's just astounding. That moment changed my life.

CNN: Why is revisiting your old high school in Seattle important to you?

Quincy Jones: It's easier to get to where you think you want to go if you know where you come from. The diversity here in the 1940s was awesome. As a kid, education is what provides you with a foundation.

This is one of the greatest high schools America has ever seen. Garfield [High School] makes my heart and soul smile. It's astounding the people that came out of this place --Jimi Hendrix and Bruce Lee went to school here. Everyone keeps saying, "What's in the water?"

Quincy Jones: I always wanted to be a trumpet player. By the time I got to Garfield [High School] I was starting to be pretty good. I was in all the bands at the school -- concert bands, dance bands, the gospel bands. Back then, Ray Charles and I used to pretend we were older than we were so that we could sneak into the jazz clubs around the city. Later we started playing in nightclubs; it was brilliant.

CNN: You are, arguably, best known for producing Michael Jackson. How did that come about?

Quincy Jones: When I was a musical director we were working together on a film project. He asked me to help him find a producer for his first solo album. Watching him was incredible. He would learn everybody else's parts -- the dialogues, the songs, the dance steps -- and I saw something in him. I saw a part of him that had never been exposed before. We went all the way to Michael's soul at that time and it was am amazing experience.

CNN: You're also credited with discovering the talk-show host Oprah Winfrey for the film "The Color Purple", which you co-produced with Steven Spielberg.

Quincy Jones: I was watching television one morning and I saw this lady on a Chicago station. I thought that if she could sing and act then she is who we're looking for.

One thing led to another and Oprah came in for a screen test. You know the rest. She's a lady who is touched by God -- such an incredible woman. Whoopi (Goldberg) is the same. It was a great experience, as a producer, doing my first film with Spielberg. I was glad that I had all of that wonderful family to work with.

CNN: Tell us about recording the song "We are the World" in 1985 to raise money for the famine in Ethiopia.

Quincy Jones: Lionel Richie (who co-wrote the song with Michael Jackson) called and asked me to be involved in a project to help Africa. I guess they wanted somebody who was crazy enough to work with lots of different people. Everybody flocked to record this song, including Ray Charles, Stevie Wonder, Bruce Springsteen, Dan Aykroyd, Bob Geldof...

CNN: You've often said that music gave you your freedom, how is that?

Quincy Jones: Music to me, at that time became a passion. It was even deeper than that because we had a strange family background. My mother was in the mental institution since I was seven, with dementia. Things weren't working out in the family sense. I didn't know my mother so I made a pact with my soul and said if I don't have one I don't need one, and I made music my mother.

Probably if I had a great family I would have been a pitiful musician, you never know. Music became my mother and it was a passion -- a total passion.

CNN: What's your approach to life?

Quincy Jones: I'm always prepared and I mix science with the soul. You do whatever it takes to get that balance. You have to turn all of your drunken dreams into sober realizations.

I think I was blessed with the ability to see things and make them happen before everybody else saw them -- whether it's with Oprah or Michael or Will Smith, who I also discovered (for the television program "The Fresh Prince of Bel Air"). You have to believe and trust yourself.

CNN: You have achieved remarkable success, yet you are very humble. What will your legacy be?