(CNN) -- There are few cities in the world blessed with a more beautiful setting than Seattle. It is surrounded by rugged green wilderness; to the west the Olympic Mountains, to the east the volcanoes and glaciers of the Cascade Range, and all around the brisk waters of the Northwest. 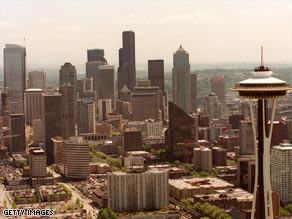 Over the years, Seattle has inspired a number of nicknames. It's not hard to understand why some refer to it as "Rain City," but visit when the sun is shining, when lakes Union and Washington are sparkling under a blue sky and majestic Mount Rainier is visible in the distance, and you'll realize that "Emerald City" is the most appropriate of its monikers.

Seattle started out as a logging town, grew as a stop-off point for gold prospectors at the end of the 19th century, and earned another nickname, "Jet City", when plane manufacturer Boeing rose to prominence in the 1950s and 60s. At the height of its powers, Boeing employed some 100,000 locals and the Jet City remained a solidly working-class town until the 80s, when local startup Microsoft started making a name for itself.

As Microsoft grew into the behemoth it is today, other tech firms such as Amazon.com and Nintendo were drawn to the city, bringing with them a wave of young, educated and affluent workers.

Seattle began to shake off its blue-collar roots and in recent years its cultural credentials have been boosted by the addition of the Olympic Sculpture Park and a showpiece public library, while the acclaimed Seattle Symphony, Opera and Pacific Northwest Ballet have all moved into impressive new buildings in the last decade.

Some resent Seattle's gentrification, bemoaning the near-gridlocked traffic and arguing that the city's most interesting neighborhoods have lost their individuality to the property developers. But if you spend some time in neighborhoods like Capitol Hill or Fremont, the self-proclaimed "Center of the Universe," you'll find there's still plenty of the native free spirit in evidence.

It was that free spirit that gave birth to Grunge, the post-punk guitar noise that came out of the city in the early 90s, when local bands Soundgarden, Pearl Jam and Nirvana became international stars. Now Grunge is just a memory, but in popular culture it remains as much of a symbol of the city as the Space Needle, the persistent drizzle and the excellent, ubiquitous, coffee shops.

Despite its rapid growth, Seattle has kept its trees and parks and many areas maintain an almost suburban feel. The city and its residents are laidback and liberal, and that famous free spirit is as at home in the great outdoors as in Seattle's boho neighborhoods. As a modern, civilized outpost among outstanding natural spectacle, the place once known as the "Queen City of the Northwest" still reigns supreme.