Seattle: What to see

(CNN) -- Seattle's character and history are closely linked to its waterside location, so it makes sense to start your sightseeing at the Waterfront. 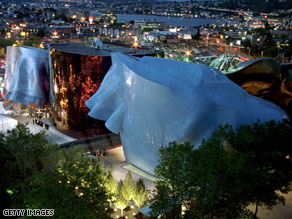 Pioneers first settled in Elliott Bay in the 1850s and these days the Waterfront area is buzzing with restaurants, bars and tourists. Kids will love the Seattle Aquarium (Pier 59, 1483 Alaskan Way), while adults will want to head straight to Pike Place Market (Pike Street).

More than just an outstanding farmers market, Pike Place is in many ways the beating heart of Seattle. Browse the farm-fresh produce and traditional crafts, and banter with the infamous salmon-tossing fishmongers, whose tourist-pleasing antics mix market trading with street theatre.

After stocking up on snacks and souvenirs, venture further into the historic Pioneer Square neighborhood and check out the totem poles in Occidental Park. There's another totem pole in Pioneer Square Park, carved by the Tlingit natives in 1938, as well as a bust of Chief Sealth of the Duwamish tribe, after whom Seattle is named.

Nearby, the Seattle Central Library (1000 Fourth Avenue) is an astonishing glass and steel construction by Rem Koolhaas. Only slightly less imposing is the pink granite structure that is Seattle Art Museum (1300 First Avenue) and the 48-foot "Hammering Man" that guards its entrance.

The museum is known for its collections of Native American and African art, while Asian art is showcased at the Seattle Museum of Asian Art (1400 East Prospect Street, Volunteer Park) in Capitol Hill. The Olympic Sculpture Park (2901 Western Avenue) is a nine-acre waterfront offshoot of the Seattle Art Museum, with free admission.

The city's skyline is dominated by the incongruous, spindly Space Needle, part of the Seattle Center, built for the 1962 World's Fair. To get there, take the monorail, another World's Fair remnant, from the Westlake Center (Pine Street at 4th Avenue). Ride a glass elevator to the 160-meter-high observation deck for an incredible view of the city and its surroundings.

While you're at the Seattle Center, take a look at the Experience Music Project/ Science Fiction Museum and Hall of Fame. The colorfully bizarre building by Frank Gehry looks like a three-dimensional cubist collage of smashed electric guitars, and is Microsoft co-founder Paul Allen's eccentric gift to the city.

Originally a museum dedicated to Seattle native Jimi Hendrix, the Experience Music Project now has all kinds of rock memorabilia and loads of interactive exhibitions. Tickets include admission to the Science Fiction Museum, which has enough sci-fi movie props to satisfy the most obsessive trekkie.

Finally, make time to stroll around the Capitol Hill and Fremont neighborhoods for a taste of the non-conformist "alternative Seattle" that brought the world Grunge and made plaid shirts fashionable.

Do you agree with our Seattle picks? Send us your comments and suggestions in the "Sound Off" box below and we'll print the best.