MAASTRICHT, The Netherlands (CNN) -- It has been a while since I've enjoyed going to church so much. 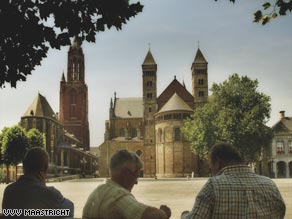 The Cathedral of Saint Servatius is still a major attraction for pilgrims.

As a lapsed Catholic I tend to keep my church attendances to Christmas and, if I'm feeling quite a lot of guilt, Easter.

However, I would happily go to "church" at Maastricht's Kruisherenhotel on a daily basis.

A former gothic church and monastery dating from the 15th century, the buildings have been beautifully renovated to welcome disciples of a new kind of religion -- luxury.

Boasting 60 rooms, dazzling but sympathetic light installations and a mezzanine restaurant and accompanying womb-like wine bar in the church's nave, it's easy to be quickly converted.

The food is also pretty good; my fish and scallops starter followed by venison the perfect communion for a late autumn evening.

The Kruisherenhotel, though, is only one of Maastricht's many gems.

The southern Netherlands city of 120,000 people does not feature prominently on many lists of must-visit places, but it should.

An easy train journey from Brussels and Amsterdam and a mid-distance journey from London, Paris and several German stations, Maastricht is laden with good restaurants (there are four Michelin-starred eateries), shopping, history, public art and surrounded by pretty villages with woodland walking paths.

The city center, like a miniature Paris, is split in two by the Maas river. Roman history and a Latin Quarter featuring boutiques and art galleries dominate the left bank, while on the right the Bonnefanten -- a contemporary art museum -- and hip retro design shops hold forth.

The religious theme continues on the left bank at Selexyz Dominicanen -- yet another church that has been converted, this time into a fabulous English- and Dutch-language book store.

Originally built in the 13th century by the Dominican order, its most recent use before 2007's spectacular renovation was as an indoor bike pound.

It now features a three-story black steel bookstack in the high nave, together with a noisy cafe in the choir. If it sounds like desecration, you couldn't be more wrong. It is a book and architecture lover's heaven on Earth.

As proud locals tell my wife and me, there are plenty of empty churches in the area that could do with a similar makeover.

Book browsing is hungry and thirsty work, but there are plenty of options for a prolonged stop: pull up a chair at one of the many cafes that surround the city's squares or head for the Mosae Gusto underground food hall.

Typically food halls give me the willies; bad food cooked hours earlier, reheated and served up for the masses.

The Mosae Gusto is the complete opposite. It gathers high-end outlets together, giving you the chance to take away delicious food or eat in and watch your meal being prepared in the open kitchens.

If it's more traditional French-influenced food with a tasty flourish you are after, then head for the welcoming La Courage on the Rechtstraat, one of the city's oldest streets.

Refueled and clearly with a blessed life to give thanks for, we stop off at a church that is still used for its original purpose.

The imposing Cathedral of Saint Servatius, originally founded in the 6th century, is the oldest church in The Netherlands, though it was substantially rebuilt and enlarged between the 11th and 15th centuries.

Saint Servatius, responsible for spreading Catholicism to the Low Countries and a diplomat in the fourth century, is buried in the crypt and his relics (i.e. bits of his bone fragment) spookily feature in the basilica's treasury.

In times of distress, his relics were carried around the town -- a procession which is now carried out every seven years.

The cathedral draws many pilgrims, with Pope John Paul II once a visitor in 1984.

Having given our praise we make a quick stop at Maastricht's ceramic museum, where the brilliant World Press photo exhibition is in residence.

The museum, a stone's throw from the river, is surrounded by tasteful inner-city apartments and close to the striking Bonnefanten, where art works by modern and old masters find a comfortable home together.

Unfortunately, it's a bit too early for us to be eating again, so we return to our hotel and the countryside around the village of Houthem-St.Gerlach -- a 10-minute train ride outside Maastricht.

Local residents are out running and cycling, while others walk their dogs to the nearest pub; everyone says hello.

The area is dotted with caves, some of which were once inhabited and a few can be toured.

Across the road from our hotel, Vue de Montagne, is the entrance to La Caverne de Geulhem -- a series of caves it uses as a restaurant and to host functions for as many as 400 people.

In a way, the caves are a metaphor for Maastricht; its delights may have been a secret for some time, but it's a pilgrimage well worth making.