PLIMOTH PLANTATION, Massachusetts (CNN) -- Modern-day pilgrims to Plimoth Plantation have much curiosity about life in the re-creation of an English village from the 1600s and a Native American homesite. But some of the thousands of people who visit daily to get a glimpse of how the first colonials existed and created the Thanksgiving tradition bring with them misconceptions about the Native people. 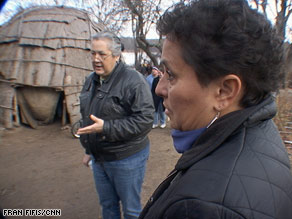 Linda Coombs, left, and Paula Peters take a gentle approach to correct visitors to the homesite.

Paula Peters, of the Mashpee Wampanoag tribe, said one of the first things she learned when she started working at Plimoth in Massachusetts 30 years ago was: "People will say things that will hurt you."

A parent might reprimand their children by saying, "If you don't behave I am going to leave you with this Indian squaw and she will cook you for dinner," Peters said.

Officials who run the site say they have tried to educate visitors by putting up signs asking them to avoid stereotypes and showing a short film at the beginning of the tour explaining what really happened when the Pilgrims first arrived in Plymouth.

Still, "People take a lot of liberties with Native people," Peters said. Some have even told her: "I thought we killed all of you."

Linda Coombs has heard that too. She has been an educator and interpreter at Plimoth since the 1970s. She says sometimes the ignorance can be fairly benign, such as when a visitor looks at Native food and asks, "You're not going to eat that are you?"

But at other times, the misconceptions can be offensive. An adult chaperone recently asked a Cherokee, Tim Turner, "Where do you get your alcohol?"

Turner told the visitor that his comment was inappropriate and then walked away -- which is what Coombs trains her staff to do.

"We try to help people understand how offensive that statement is, and then replace it with truthful information," Coombs said.

Peters likes to quote another Native American, Ella Sekatau, a Narragansett, who says "ignorance is like a stone wall. If you try to fight it, you will end up with bloody fists. Instead you must take down each stone, gently, one at a time."

So when a child is war-whooping and the parent says "stop acting like a wild Indian," Peters said you have to "carefully dismantle the myth. It's a delicate procedure."

The gentle approach appears to be working. Evelyn Hardin from Shutesbury, Massachusetts, who makes the 100-mile trek to Plimoth every year at Thanksgiving to remind herself and her family where it all started, said her family "has learned to be more sensitive to the Native culture."

Peters agreed that many visitors do seem to get the message. "In a great many cases we do take a stone off the wall and sometimes you even see a light on the other side."

The best progress is made with schoolchildren who have not been tainted by inaccurate history lessons or so many old cowboy and Indian movies, Peters said.

And Plimoth, with its homesite staffed by Native Americans, is a great place for teaching, Peters said.

"We have a unique opportunity here because of our history to teach them about our culture and dispel the myths."

All About Native American Issues