WASHINGTON (CNN) -- Government-issued holsters used by thousands of armed airline pilots increase the chance that guns will be accidentally discharged in the cockpit, according to federal investigators. 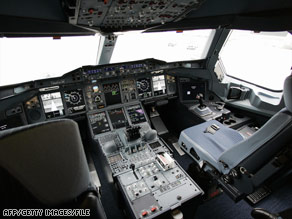 The holsters' design renders guns vulnerable to accidental firing if they are improperly handled, and should be replaced, said investigators who studied an incident in March in which a pilot discharged his weapon.

They said the Transportation Security Administration -- which trains and equips the armed pilots -- should provide a safer way to secure firearms in the distracting, sometimes dark environment of a cockpit.

In March, a US Airways pilot accidentally fired his gun while he was stowing it during an approach to Charlotte/Douglas International Airport in North Carolina.

The bullet pierced the cockpit wall and fuselage, but no one was injured. No crucial wiring was struck and the plane landed safely.

The incident is the only known gun discharge in the cockpit of a commercial airliner since the federal government began handing out the holsters in its armed program, known as Federal Flight Deck Officer.

While the exact number of armed pilots is confidential, the TSA has said there are more armed pilots than Federal Air Marshals, a number it says is in the thousands.

After the incident, the TSA removed Capt. James Langenhahn from the program. US Airways fired Langenhahn, ending his 24-year career with the carrier. Langenhahn is fighting his dismissal.

The TSA has defended the locking holsters, saying pilots have handled the holsters "millions of times" without incident since the holsters were put into service two years ago.

But the Office of Inspector General -- an independent arm of the Department of Homeland Security -- concluded the design of the locking holsters "increases the likelihood of an accidental discharge of a weapon in an aircraft cockpit."

"In a darkened cockpit, under the stress of meeting the operational needs of the aircraft, a pilot could inadvertently discharge the weapon by failing to ensure it is properly seated in the holster, securing the trigger lock and then pushing the weapon inward to secure the holster snap."

The weapon also can be discharged if the pilot inserts the padlock hasp into the holster incorrectly, the report says.

"This is encouraging. This will probably have a favorable impact in increasing the effectiveness of the [armed pilot] program and in my personal situation," Langenhahn, 56, said when informed of the OIG report on Tuesday.

The TSA on Tuesday reiterated its statements that the holsters are safe.

Pilots say TSA protocols, which require pilots to lock their weapons every time they leave the cockpit, greatly increase the chance of a mishap.

Mike Karn, vice president of the Federal Flight Deck Officer Association, said pilots should be trusted to unlock their guns when they leave their homes or hotels and lock them at the end of the business day.

The inspector general's recommendations on holsters were included in a semiannual report to Congress released this week.