Iggy Pop: A Lust for Life

(CNN) -- Iggy Pop invented punk rock. That's how cool he is. His songs have been covered by the likes of Guns N' Roses, REM, The Red Hot Chili Peppers and The Sex Pistols. 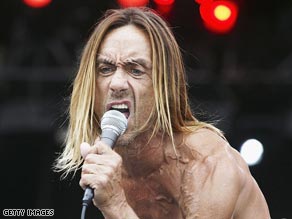 He is the wildest wild man of rock and his four-decade career has been marked by drug addiction, self mutilation and onstage nudity -- and at 61 years old he is showing no signs of growing old gracefully.

Born on April 21, 1947, in Muskegon, Michigan, James Newell Osterberg grew up in a trailer park.

When he began learning the drums as a teenager his parents gave up their bedroom to house his drum kit. It wasn't long before he took his talent out of the bedroom, playing with high-school band The Iguanas, from which he later took his stage name.

After graduating from high school in 1965, Iggy formed a blues band called the Prime Movers. Following a brief stint at the University of Michigan he moved to Chicago, playing drums with local bluesmen, before returning to Michigan with his sights set on fronting a rock band.

In 1967, he recruited guitarist Ron Asheton, his drummer brother Scott Asheton and bassist Dave Alexander and formed The Psychedelic Stooges.

It was after seeing the Doors in concert, and inspired by Jim Morrison's confrontational stage persona, that James Osterberg reinvented himself as Iggy Pop, a drug-fueled, crazed whirling dervish of a front man, who would strut semi-naked around the stage, roll around in broken glass and dive headlong into the audience.

The band shortened its name to The Stooges and released its eponymous debut in 1969. Right from the start there was clearly something different about Iggy Pop. At the height of flower power, when The Stooges' contemporaries were singing about peace and love, Iggy was singing "No Fun" and "I Wanna Be Your Dog."

See photos of Iggy in action. »

The album was a brilliant mess of raw, blues-influenced garage rock, but it sold poorly, as did the 1970 follow up "Fun House," later described by Jack White of the White Stripes as "the definitive rock album of America." Watch Iggy Pop show CNN around Miami

By this time, Iggy had begun the Heroin use that would plague his career and in 1971, The Stooges split up after being dropped by their record label. That same year, Iggy met David Bowie, who took him to England, re-united The Stooges and produced 1973's "Raw Power."

With "Raw Power," Iggy and the Stooges created the blueprint for punk rock and made an album that would one day be regarded as a landmark in rock music, an album that Nirvana singer Kurt Cobain listed as his favorite of all time. Nonetheless, it was another commercial failure and in 1974, The Stooges split again.

By this time, Heroin had taken over Iggy's life and in 1975 he checked himself into a Los Angeles mental institution in an effort to kick the habit. Bowie visited him there and took Iggy along on his 1976 tour, before the pair moved to West Berlin in an effort to get away from the temptation of drugs.

It was there that Bowie produced and co-wrote Iggy's 1977 solo albums, "The Idiot" and "Lust for Life." The latter included the songs "The Passenger" and "Lust for Life," which have since become staples of TV ads and movie soundtracks, spawning countless cover versions.

More commercial than The Stooges' records, Iggy's solo albums were met with critical acclaim and better sales, but never breakthrough into the mainstream. Songs that Bowie wrote with Iggy during this period were later included on Bowie albums, with "China Girl" becoming a hit single for Bowie.

Iggy carried on touring and releasing albums throughout the 80s, without much commercial success, although the single "Real Wild Child" was a hit in the U.S. and UK. But by the end of the decade, Iggy was beginning to be recognized as "the Godfather of Punk," with a new generation of bands citing him as an influence.

Members of Guns N' Roses and the B52s appeared on his 1990 album "Brick by Brick," which sold more than 500,000 copies, and his 2003 album "Skull Ring" featured the likes of Green Day, Sum 41 and Peaches. But what really made "Skull Ring" special was that it re-united Iggy with Ron and Scott Asheton of The Stooges.

After years on the periphery, Iggy was suddenly fashionable, with the reformed Stooges appearing at festivals all over the world. The band recorded the album "The Weirdness" in 2007, but it was their astonishingly powerful live performances that showed why they were still such a big deal 40 years after they started out.

Any hopes Iggy may have had for a peaceful retirement in Miami have been dashed. At 61 years old he is still performing with the same energy and abandon as when The Stooges first formed, with only marginally less stage diving and nudity. It seems that the world has finally caught up with Iggy Pop, the most exciting, unpredictable and entertaining man in rock.