Iggy Pop: 'I was looking for an elegant coma'

MIAMI, Florida (CNN) -- Along with his band The Stooges, Iggy Pop invented punk rock and his outrageous onstage antics have inspired countless wannabes. After years of excess, the 'Godfather of Punk' moved to Miami in search of peace. CNN's travel show My City, My Life caught up with him to talk about music, inspiration and life in his favorite city Miami. 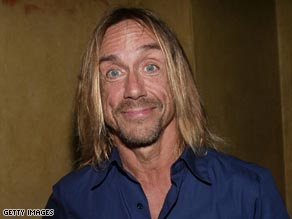 Iggy Pop: "Don't look now but that guy is going to try and carjack your rental car!"

CNN: What made you move to Miami?

Iggy Pop: I was fed up after 25 years in huge, dark, media-centric cities. I decided to find a house and move here. I was looking for something in a kind of elegant coma with a lot of peace and convenience.

CNN: Is Miami similar to you as a person?

CNN: How would you describe Miami's personality?

IP: Miami's a hell of a good town to eat a banana!

CNN: What do you do when you need writing inspiration for your music?

IP: I need to feel good. When I was 20, 21 years old, it meant three or four joints and then went from there. Now, I usually get it after exercise or from nature, sometimes from a woman or a city. I get it from a good song or a great book.

Something I like to do a lot is just sit by water when there's a current and just stare into the water. I don't fish, I don't hunt, I don't scuba, I don't spear, don't boat, don't play basketball or football -- I excel at staring into space. I'm really good at that.

It helps the writing a little bit, the kind of writing that works for music, which is tiny writing. It's not like writing a novel -- it's all about making your point small.

CNN: What do you most love about Miami?

IP: I love what was here before any of the people - the puffy clouds, the forgiving quality of the light, the breeze that renews life and hints at freedom, and the sea. It's somewhere you can look out and just see things stop.

Second only to the sea the Miami sky has been the greatest comfort in my life past 50. On a good day, when the wind blows from the south, the light here is diffuse and forgiving.

See photos of Iggy in Miami. »

CNN: If you were an estate agent, how would you sell Miami?

IP: I'd say: "you've done your time up north, you've got your medal; now come down to Miami and heal yourself."

CNN: If you were trying to put people off Miami, what would you tell them?

IP: I'd say: "Don't look now but that guy is going to try and carjack your rental car!"

CNN: Is Miami a poor cousin to New York or LA?

IP: Miami's not anybody's poor cousin. It's an aspiration to live in this town, not something you have to do to promote yourself like some of the larger cities.

CNN: What's the stereotype of Miami and is it correct?

IP: It's changing rapidly but, more than anything else, it has always been associated with retirement and indolence in equal proportions. Miami's reputation is probably a little low brow, which is changing.

CNN: How have the changes in Miami affected you?

IP: Miami is growing and that's always a tricky proposition. Basically, I'm one of those characters who like to lurk where not too many people are, so the effect on me has been to push me bit by bit like an Indian tribe, closer and closer to the edges of town, which is fine.

CNN: How has Miami influenced you as an artist?

IP: Miami has given me 11 very good years now and has prolonged my abilities and energies, and provoked my good humor enough that I could continue in my field. But it's not a place to come to get an idea. Come here to catch a fish!

IP: It's a very musical town and it's full of some of the best musicians you'll find anywhere in any genre -- soul, Latin, pop, salsa. There are some damn good rock players down here. There are a lot of good little punk bands here -- little punkers with good little attitudes.

It's a very musical place and I kind of like that it puts rock and roll in perspective. It's not the biggest or only thing here and I don't think it ever should have been.

CNN: If Miami was a person, who would it be?

IP: It would be Rudolf Valentino, because it's dark and moody, with a brilliant and sensual side, and it captures and inflames the imagination of a great deal of the western world.

CNN: How would you describe Miami in one sentence?