Sample the culinary treats of Miami

(CNN) -- As you might expect from a city that has districts called Little Havana and Little Haiti, there's no shortage of hearty Cuban and Caribbean cuisine in Miami, but the city's elaborate mix of immigrants has also resulted in some fascinating culinary fusions. 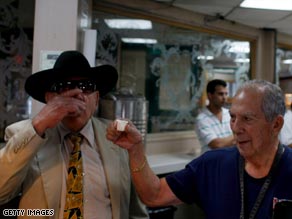 "Floribbean" cooking mixes elements of traditional Caribbean cookery with modern techniques and an emphasis on fresh produce, while the style known as "Nuevo Latino" revisits classic recipes from all over Latin America, using choicer cuts of meats, healthier ingredients and an added an North American sensibility.

There's nothing "nuevo" about Versailles Restaurant (3555 SW. Eighth Street), which, in spite of the French allusions of its name, serves reassuringly traditional Cuban dishes. This Little Havana institution specializes in cheap hearty staples like "moros" (black beans and rice) and "vaca frita" (shredded fried beef with a garlic seasoning), but the real draw is people-watching in the heart of the Cuban exile community, as the émigrés reminisce about the old country.

The Versailles bakery next door does great empanadas, fruit juices and Cuban coffee, which is an entirely different beast from the regular American filter variety. Café cubano, or "cafecito," is like a sweet espresso and is served in tiny, potent shots. Add a splash of steamed milk to get a delicious "cortadito." Outside Little Havana, David's Café (1058 Collins Avenue) in South Beach knows how to whip up a mean "café con leche."

As with so many things in Miami, when it comes to fine dining, South Beach is the place to be. If you like to eat in the company of the glitterati and you've got the bank balance to back you up, take your meat-loving self to Prime One Twelve (112 Ocean Drive). It may be just a steakhouse, but this is the kind of steakhouse favored by A-list celebs. A filet mignon will set you back $52, and you'll love all 12 juicy ounces of it, while a dessert of fried Oreos is diet-wreckingly good.

Do you agree with our Miami picks? Or have we missed out your favorite spot? Tell us in the sound-off box beow.

Elsewhere in South Beach, Lincoln Road is home to some very chic eateries, many of which get away with charging ridiculous prices for very ordinary fare. Fortunately, there's Sushi Samba Dromo (600 Lincoln Rd), with its seafood-based fusion of Japanese, Brazilian and Peruvian cuisine. Think sashimi flavored with exotic fruits and you'll be on the right track. Kind of... For sushi of the more traditional kind, try Nobu at the Shores Club hotel (1901 Collins Ave, Miami Beach), which also does excellent tempura and teriyaki.

Joe's Stone Crab (11 Washington Ave) is another South Beach favorite. Joe's doesn't take reservations and there are huge queues for its legendary crab, but if you've got better things to do than queue for two hours for your supper, you can always grab a takeout from the counter next door.

If you want to impress that special someone, there's nowhere better than Casa Tua (1700 James Avenue). This secluded, romantic hideaway has superb Italian food and is suitably expensive.

Vegetarians are well catered for at the Lost and Found Saloon (185 NW 36th Street) in the Wynwood neighborhood, a relaxed but stylish option for breakfast, lunch and dinner. Gourmet Carrot (959 West Avenue, Miami Beach) is another good spot for veggies, or anyone with a hankering for a deliciously healthy smoothie.