Insider tips to make the most of Miami

Multicultural, multilingual and multifaceted, there's more to Miami than meets the eye. Make the most of your stay with these tips. 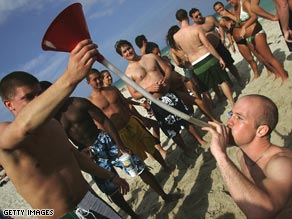 Miami Beach during Spring Break may not be to everyone's taste.

Get around
Miami is a sprawling city and exploring it on foot just isn't an option. Unless you're planning on spending all your time on the beach, you're probably going to want your own set of wheels.

There are car hire places scattered throughout the city, but if you want to cruise Ocean Drive in style you can hire a Harley-Davidson from Peterson's (19400 NW 2nd Avenue), from $100 a day. But before you hop on that hog, a word of caution: Miami's motorists have been named the most aggressive in the U.S. for the last two years.

If you're in Downtown, the Metromover is an automated monorail that you can ride for free. It also makes a good vantage point for photographing the surrounding skyscrapers. If you're out and about in Coral Gables you can take advantage of the recently launched a free shuttle service.

If you're in Miami, the chances are you'll be wanting to kick back and soak up some of that glorious Florida sunshine. South Beach is the classic Miami sunning spot, but if you want to avoid the crowds, Sunny Isles Beach, at the northern end of Miami Beach, is a better bet. Nearby, Haulover Beach is another good bet and is "clothing optional" -- handy if you're trying for an all-over tan.

A little further afield, Key Biscayne, five miles from the mainland, has some great beaches, as does Fort Lauderdale, some 30 miles north of Miami.

Do you live in Miami? Share some insider tips of your own.

Breaking point
From early March to mid April Miami is plagued by a voracious swarm of college kids on their spring break. These exuberant youngsters descend on South Beach, intent on playing beach volleyball, partying hard and vomiting in public. Unless hanging out with beer-belching frat boys is your thing (and why wouldn't it be?), Miami is best avoided during this period.

A city for all seasons
Because Miami is a beach destination, it has definite holiday seasons. December to March is the peak season. Hotel prices can double, or even triple, and you'll need to book well in advance. Summer means guaranteed sunshine, but it also means tropical downpours. It can also be unbearably humid, all of which means plummeting hotel prices. June to November is hurricane season, although Florida has an excellent advance warning system, which you'd do well to heed.

Evergreen Everglades
If you can muster the energy to haul yourself off the beach, hire a car and head west to the Evergaldes, a vast, swampy area filled with alligators, flamingoes and hundreds of bird species. Entrance to the Everglade National Park is $10 per car, which grants you access to 1.5 million acres of a unique ecosystem.

Just off the southern tip of the Everglades are the Florida Keys, a 130-mile-long chain of coral islands linked by the Overseas Highway. These laid back islands are a world away form the frenetic glamour of Miami Beach. The Keys offer fishing, kayaking and snorkeling, as well as some fine beaches.