Miami: No longer a city of vice

(CNN) -- Of course the TV series Miami Vice seems dated now, but it's not just because Don Johnson's white Armani suits and slip-on shoes belong to a mercifully bygone era. The fact is, Miami is no longer the same city as the one portrayed in the 1980s cop show. 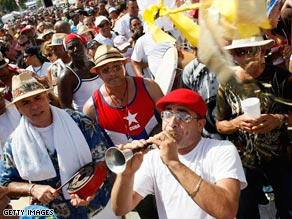 The expansive sandy beaches are still there, as is the surfeit of sunshine, the hint of the exotic and the hordes of sun-hungry tourists who have flocked to this holiday hotspot for the last 80 years. But Miami has shed much of its unwanted baggage from the 80s and has grown beyond a resort town into something more substantial.

Still barely 100 years old, Miami was a tourist destination almost from its inception. The offshore sandbar called Miami Beach was quickly recognized as having all the ingredients of a world-class holiday resort and the hotel-building spree that took place in the 1920s and 30s has left Miami Beach with hundreds of stunning Art Deco structures that give the area its distinctive look

By the 1980s, as well as being the destination of choice for holiday makers, retirees and 'snowbirds' (Canadians and northern Americans wintering in Florida), Miami had attracted an uninvited guest -- the 'cocaine cowboy.' Miami's proximity to South America made it a key point of entry for Colombian cocaine smugglers and the city became a battleground for ruthless drug barons intent on grabbing their piece of the American Dream.

The mid 80s was the Miami Vice era, when the city's reputation for glamour and hedonism came with a side order of carjackings and gangland shootouts. But by the mid 90s, Miami had largely driven the cocaine cowboys out of town and hoteliers like Ian Schrager began converting some of those Art Deco classics into sophisticated boutique hotels fit for the international jet set. The guns may have gone but the glitz was never far away.

Now that Miami's been to rehab and come out cleaned up and healthy, it turns out there's more to the city than glitzy nightclubs and the surgically enhanced bodies of the beautiful people. Miami has acquired a reputation as the new kid on the block in the modern art scene, a reputation that was cemented when the world's most prestigious modern art fair, Art Basel, arrived in the city in 2002.

Just like the snowbirds, Art Basel returns to Miami each winter and the Wynwood neighborhood has now become a bona fide art district, with exclusive galleries showcasing cutting-edge art all year round. Nearby, the Design District is full of studios and workshops producing contemporary furniture and art.

Then there's the fact that Miami is one of the most cosmopolitan cities in the world, with some 60% of the population born outside the U.S. The food, music, culture and language of Latin America have all become part of modern Miami, giving the city a cultural heritage that belies its youth.

But don't think Miami's reinvention as a cultural destination has done anything to dent it's appetite for the good times. When it comes to partying, there's not many places that can keep up with Miami, and even fewer that can do it with as much style. In truth, there's still a touch of the old Vice about Miami, and who knows, with the 80s revival, we may not have seen the last of those white suits.