Where to stay in Miami

(CNN) -- Let's face it, if you're on holiday in Miami you'll want to be based near the beach, which, fortunately, is where the city's most glamorous hotels are located. 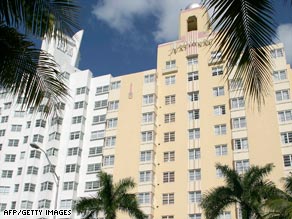 South Beach is known for its Art Deco hotels, like The Delano, left.

South Beach is known for its distinctive Art Deco hotels, mostly built in the 1920s and 30s and often painted in bright pastel colors. South Beach's Art Deco originals have been protected since the 1970s, and many have since been renovated to the highest specifications.

Collins Avenue is home to more than its fair share of boutique hotels. The Delano (1685 Collins Avenue, doubles from $400) dates back to the 1940s and is crowned with streamlined fins that are pure Deco.

It has been re-imagined by Ian Schrager, with a white, minimal Philippe Starck-designed interior that is sophisticated and hip. The Delano's Rose Bar is one of the best places in town for a poolside cocktail.

The Shore Club (1901 Collins Avenue, doubles from $300) is another Schrager revival of a Deco hotel and, if anything, it's even cooler than The Delano. Rooms are high-tech, welcoming and often occupied by visiting celebrities. The attached sushi restaurant Nobu is top notch and the stylish Skybar, with its four bars and tropical gardens, is one of the city's hottest nightspots.

Do you have a favorite hotel or place to stay in Miami?

If you've just won the lottery, you'll want to stay at the Setai (2001 Collins Avenue, doubles from $785). Another conversion of an Art Deco hotel, albeit augmented by a 40-storey tower, the Setai adds tasteful Asian influences. Its cool, dark interior is a refreshingly tasteful oasis among the South Beach excess, and is both unashamedly luxurious and frighteningly expensive.

Back in the real world, The Standard (40 Island Avenue, Miami Beach, doubles from $250) is a little stranded in its Biscayne Bay locale, but is great value. The real draw is the superb spa, with its infinity pool and open-air mud lounge. But this is no austere health retreat; it's relaxing and fun, and all the better for it. This is Miami after all...

A cheaper, quirkier option is Pelican (826 Ocean Drive, doubles from $200). Owned by Italian fashion label Diesel, this is a colorful, kitschy place, with individually themed rooms, such as the ornate and floral 'Power Flower' room. The hotel's Pelican Café has an outstanding wine list and is surprisingly good value.

Away from the beach altogether, the Biltmore (1200 Anastasia Avenue, doubles from $310), over in Coral Gables, is an absolute gem. The rooms aren't exceptional but the building is a beauty, modeled on the Giralda bell tower in Seville, with ornate Moorish-inspired touches. Al Capone was a big fan back in the 1920s and these days there's a massive pool, an 18-hole golf course and rumors of resident ghosts...

Do you agree with our Miami picks? Send us your comments and suggestions in the "Sound Off" box below and we'll print the best