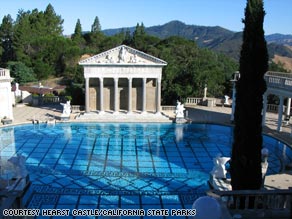 The Neptune Pool at Hearst Castle is 104 feet long and 95 feet wide at the alcove.

I decided to celebrate the unofficial return of reasonable driving vacations with a venture to the ultimate temple of excess -- Hearst Castle.

From Los Angeles, my family and I retraced the journey of Hollywood luminaries who headed north to hang out with publishing tycoon William Randolph Hearst.

Winston Churchill and President Calvin Coolidge also rested here amid art and antiquities from around the world.

Hearst Castle looks down over golden fields, the glistening Pacific and the town of San Simeon, California, home to less than 500 people.

We took a tour bus from the visitors center to the mansion, a long gull's dive from the ocean, 1,610 feet above sea level.

Hearst hired San Francisco architect Julia Morgan in 1919 and by 1947 the 165-room estate stretched over 127 acres.

It's crystal clear Hearst was a demanding mastermind of his kingdom on the hill, putting Morgan through what must have been agonizing brain twisters.

Tours: Most Hearst Castle tours are $20 dollars per adult and $10 per child.


The estate is decorated for Christmas as it was during the time of William Randolph Hearst.

Visitors see that when Hearst wanted European choir chairs wedged into his assembly room, Morgan made it work. When he wanted elaborate ceilings salvaged from Europe, Morgan expanded their reach to fit into the estate's rooms.

A massive 95 x 104-foot outdoor swimming pool, made of concrete and Vermont marble, is one of the central jewels of the property.

Our guide recounted Hearst house rules. In an effort to control his guests' alcohol consumption, Hearst banned them from bringing their own liquor. The Hollywood types reportedly snuck it in anyway, like frat boys at a football game.

Hearst mandated unmarried guests sleep apart, while violating his own edict by sleeping with his beloved actress friend Marion Davies. Though Hearst remained married to Millicent Hearst, with whom he had five children, Davies' ghost is everywhere at Hearst Castle.

Images of the actress, along with Charlie Chaplin and others stars, flicker about in a short film shown in the mansion's 50-seat movie theater.

Owing to my Belgian roots, I looked at the tapestries and cracked to my kids, "No wonder my 83-year-old mother can still sew a tiny patch onto a Girl Scout vest."

The castle's grandeur was enough to hold the childrens' attention. We saw them as young as 4 years old, eyes popping while taking in ancient Egyptian statues or towering Christmas trees.

"This guy was rich!" my friend's 7-year-old-son, Nicolas, exclaimed.

Perhaps a headline from Hearst's San Francisco Examiner in another era could best describe our trip:

"The road to fun is back and affordable!"