(Budget Travel) -- It's every city's favorite excuse for a party. Here are ten spectacular ways to ring in 2009. 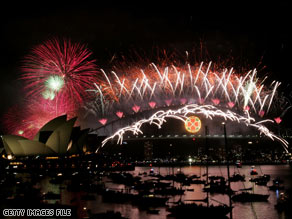 If Times Square's light show doesn't cut it for you, head to the capital of Thailand, where a 52-foot-high Greeting Ball Tower signals the arrival of midnight.

Outside of the giant CentralWorld shopping mall, about 500,000 revelers join hands to count down to the New Year.

Earlier in the evening, events include seven concert performances by Thai stars.

Grab a glass of Chang beer from an outdoor garden for about $1.50. BudgetTravel.com: See slideshow of New Year's hot spots

Berlin: The best and the wurst

Despite temperatures of around the freezing point, Berliners host an open-air New Year's Eve bash, and the city claims that it is the largest such party in the world.

Roughly one million merrymakers pack the nearly mile-and-a-quarter-long stretch between the Victory Column and the Brandenburg Gate.

Elsewhere in town, Germans are as law-abiding on Silvester (New Year's Eve) as always, lighting their private fireworks in designated spaces under police watch.

But they also cut loose with practical jokes, such as filling homemade doughnuts with mustard instead of the usual jelly.

Hot tip: If you need a breather, duck into one of the scattered party tents. Rest on free heated benches and munch on specialty sausages, such as bratwurst for around $3. Or else head to Unter den Linden Boulevard, which presents a clearer, less claustrophobic view of the fireworks.

Cape Town: Where the Second is best

A slave's only day off in 18th-century South Africa was on January 2, and so it's on Tweede Nuwe Jaar (Second New Year) that Cape Town parties the hardest.

Up to 2,800 minstrels paint their faces white and storm the streets for the Cape Town Minstrel Carnival.

Expect crowds of more than 80,000. Clad in bright colors, participants carry instruments (such as whistles) and umbrellas while parading from Keizersgracht Street past City Hall and into Rose Street.

South African wares and local delicacies are hawked along the route, and troupes compete for titles like Best Dressed.

Hot tip: Pop into a café along the cobblestone streets of the Bo Kaap residential neighborhood. Watch from indoors as minstrels perform patterned dances past brightly painted houses.

On the Monday before New Years 2009, a torchlight procession along Princes Street whisks a giant wicker lion to Calton Hill, where it's torched.

Then on New Year's Eve, indie rockers like Glasvegas blast away in the streets, while more mainstream rockers like Paolo Nutini perform at the Princes Street Gardens.

Nearby, there's a ceilidh, a traditional Scottish party where locals dance gigs and reels to a piper's beat.

Hot tip: Practice the traditional Scottish song "Auld Lang Syne" in advance. Everyone belts it out when the clock strikes 12.

Hong Kong: Reaching for the stars

The waterfront promenade Tsim Sha Tsui is a fine vantage point to take in the midnight pyrotechnics above the city's tallest building, 2 IFC.

For an even more memorable view, jump aboard the Shining Star Ferry for a two-hour cruise of Victoria Harbour.

It departs from the Tsim Sha Tsui pier; price has still not been set but will probably be around $20 per adult.

Hot tip: A carnival in Sha Tin Park will include roving street performances of music and puppetry. It's a 15-minute tram ride from downtown (plus a roughly 7-minute walk).

Vegas lives up to its rep as a party town on December 31, with lunatic stunts, a massive light display, and performances by well known entertainers.

The Strip hosts the free portion of America's Party, an extravaganza with a fireworks display launching from various spots.

On Fremont Street, folks pay $20 a head to see Tribute-Palooza, a set of eight bands that imitate major acts like U2, Kiss, and Elton John.

For the Strip, see visitlasvegas.com.

As in years past, New Orleans puts its own twist on New York City's ball drop.

Its spotlit gumbo pot drops from the Jax Brewery at midnight. Its fall prompts a nightlong bar crawl in the historic French Quarter.

This year, is the 75th anniversary of the Sugar Bowl, and the football matchup takes place on January 2.

Expect a football theme for most of the weekend's events. For example, in Jackson Square after the gumbo pot drop, a light-and-sound display will synchronize the fight song of each team playing in the Bowl this year with the appearance of each team's colors in the sky.

Hot tip: Hop the ferry from Canal Street to Algiers Point (friendsoftheferry.org), where you can get a comparatively peaceful view of fireworks.

Icelandic law allows a firework free-for-all on New Year's Eve, making for a raucous night in the capital city.

Note that on this holiday, local bars and clubs open a little after midnight.

The warmest way to enjoy the celebrations is to take a coach tour.

Iceland Excursions' Gray Line stops at the largest bonfires for $71 per adult. A midnight toast of sparkling wine is included, of course.

The two-and-a-half mile stretch of Copacabana Beach plays host to more than two million partygoers decked out in traditional white.

Cariocas (as the locals call themselves) make offerings of red roses and white gladioli to Iemanjá, the goddess of the waters, before an all-night whirlwind of dancing and live concerts.

Head to majestic Sugarloaf Mountain for a somewhat quieter vantage point for taking in the fireworks display.

Hot tip: Looking for passion? Wear a hint of red to send the right message.

Because of its location, Sydney is among the first major cities to greet the new year.

The city will synch up its pyrotechnics with colorful lighting effects on the arches of the Sydney Harbour Bridge.

Revelers gear up earlier in the day. Waterfront events attract crowds of Sydneysiders in T-shirts and shorts -- plus indigenous people in traditional garb.

Between 3 p.m. and 6 p.m., aircraft will run hourly flyovers above Sydney Harbour Bridge.

After 9 p.m., 55 illuminated ships circuit Sydney Harbour, foreshadowing the barrage of light and sound to come.

Details: sydneynewyearseve.com.au ; the site lists dozens of vantage points and other info.

Hot tip: Lay down a blanket at North Head at Sydney Harbour National Park, a relatively uncrowded hangout for gazing at the fireworks.