(CNN) -- Thousands of lights dance across the field as holiday music plays in the air. Cars slowly wind their way through displays of elves, candy canes, reindeer and snowmen. Children ooh and aah. Adults smile peacefully. 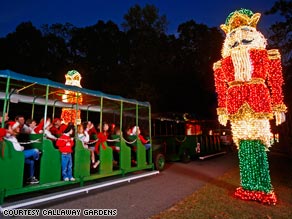 Miles away at home, you're on a ladder, in the freezing cold, untangling an impossible string of broken red and green bulbs.

Holiday decorating isn't always all it's cracked up to be, but the professionals have it down to a science -- providing memorable experiences filled with wonder and joy.

CNN spoke with Callaway Gardens, host to one of the largest holiday light shows in the south. Their technical director, Bill Ferrell, joined forces with GKI, an outdoor light distributor, to offer four more suggestions for our Five to Go list:

Fantasy In Lights at Callaway Gardens opened in 1992 with five scenes. Since then, this outdoor light and sound show has become one of the brightest holiday shows in the South.

More than 8 million lights create dozens of displays, 99 percent of which are designed and built specifically for Callaway. The lights require 3,500 extension cords, 32 miles of cable and more than 3,900 person-hours to install. As its Web site states: "To turn on the show, more than 1,000 switches have to be flipped every night. It takes two workers at least 45 minutes to turn on all of them."

After your leisurely ride, you can check out the Christmas Village -- complete with the "Land of the Nutcrackers," the "Ornament Forest" and, of course, "Toyland."

You know that street in your city that goes all out for Christmas? The town of Branson, Missouri, is exactly like that, but on a much larger scale. Throughout the holidays, the entire community is illuminated with more than 5 million lights, all of which set the scene for the two-mile Festival of Lights Parkway.

Don't forget The Shepherd of the Hills Trail of Lights. The trail ends at Inspiration Tower, where visitors can climb (or take the elevator) to the top for a great view. Also available are more than 100 shows, including musicals, comedies and clean family fun.

Jennings Osborne's daughter wanted one thing for Christmas in 1986: to have their whole house covered in lights. Jennings worked to make his youngest daughter's wish come true, and eventually their display grew to more than a million lights. The family even bought the property next door to expand their hobby.

Neighbors were displeased with the holiday traffic jams, however, and the Osborne's tradition was in danger of being canceled. The Walt Disney Company heard of the troubles and offered a place for the Osborne's spectacle. Now every year on New York Street at Disney's Hollywood Studios, millions of lights enchant people of all ages. The park even fills the air with "snow" to enhance the experience.

The lighting of the Rockefeller Center tree brings thousands of people out each year, including some top celebrities. But just because the lighting ceremony this year has passed, that doesn't mean it's not still a top holiday light display.

More than 30,000 LED lights cover a 72-foot Norway spruce that's 40 feet around. The 8-ton tree was donated this year by a family in New Jersey.

Although the tree with its crystal star is a sight of its own, Christmas at Rockefeller Center has many other attractions. You can go ice skating, visit the Radio City Music Hall to see the famous Rockettes or walk to nearby Saks Fifth Avenue -- a store that is well known for its holiday window displays.

The Biltmore Estate is a 250-room country castle that includes a library, banquet hall, 65 fireplaces, indoor pool, bowling alley and many priceless antiques. For the holidays, it's decorated from floor to ceiling.

Garland covers the mantles, red ribbon swirls around windows and lights are strung from every corner. New this year is a 56-foot Norway spruce and surrounding "forest" on the front lawn that boast more than 55,000 lights.

Live entertainment is another added attraction throughout the Biltmore Estate. Musicians, dancers, storytellers and marionettes will perform amid the decorations.