Tips for driving in Europe

(Budget Travel) -- A more unified Europe has made it simpler to go from one country into another. Driving on the continent, however, remains a challenge because of inconsistent traffic laws and road signs. We asked representatives of several rental-car companies about little-known rules and conventions that visitors should know before hitting the road in Europe. 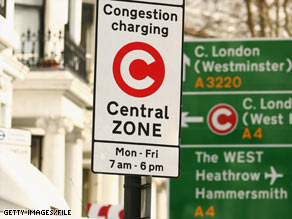 You must pay to enter London, England's congestion zone on weekdays from 7 a.m. to 6 p.m.

United Kingdom
• On weekdays from 7 a.m. to 6 p.m., London charges a fee to enter the city's congestion zone, which is marked with signs showing a white C in a red circle.

The charge may be included in the cost of your rental car, so ask. Otherwise, you can pay online (cclondon.com) or at stores, gas stations, and newsstands where you see the congestion logo. Your car's license-plate number is then registered in an electronic database. Cameras take pictures of your plate when you enter the zone, and a computer system checks the database to make sure you've paid.

• In rural Scotland, watch for Highland cattle that like to lie on sun-warmed roads after dark. See European traffic signs and learn their meanings

France
• Children under 10 are prohibited from riding up front -- they must be buckled up in the backseat.

Germany
• Obstructing traffic on the autobahn is against the law -- so running out of gas is not only dangerous, it can get you fined.

• You're required to use low-beam headlights if it's overcast, raining, or snowing.

Italy
• Only local traffic is permitted during certain hours in the historic centers of many Italian cities. White signs with an open red circle and the times that traffic is restricted mark the entrances to the zones. If your hotel is in one of these areas, ask the concierge to register your license-plate number with the local authorities. Cameras take pictures of the plates when cars enter the zones, and a computer system tracks down vehicles that aren't registered. Violators are fined.

• On roads too narrow for two vehicles, the larger one has the right-of-way.

Spain
• You must put on a reflective safety vest any time you get out of your car on the sides of highways or unlit roads. Most rental-car companies provide one in the trunk, but you should check before leaving the agency.

• People who wear eyeglasses are required by law to have a spare pair in the car.