Behind the Scenes: 'Eyewitness to Murder: The King Assassination'

Editor's note: In our Behind the Scenes series, CNN correspondents share their experiences in covering news and analyze the stories behind the events. Here, senior producer Jim Polk talks about the upcoming documentary "Eyewitness to Murder: The King Assassination." 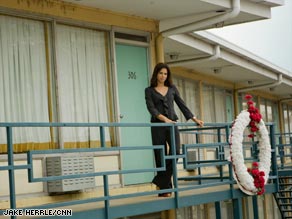 CNN's Soledad O'Brien on the balcony of the Lorraine Motel where King was assassinated on April 4, 1968.

MEMPHIS, Tennessee (CNN) -- The Rev. Billy Kyles, the only person standing on the second-floor balcony of the Lorraine Motel with Dr. Martin Luther King Jr., had started to walk away when he heard the shot.

"When I turned, I could see him lying on the balcony. One of his feet was sticking through the railing, and there was this huge hole in his face," Kyles told CNN correspondent Soledad O'Brien as they stood together in front of Room 306 where the civil rights leader was gunned down 40 years ago this April.

In producing its two-hour documentary, "Eyewitness to Murder: The King Assassination," CNN Presents turned to the people who were there that day and others personally involved in the movement to tell their first-hand stories of a tragedy that still resonates today.

Fireman George Loenneke had asked to take a look through a police surveillance peephole in his fire station across the street and saw King at the moment he was hit.

"It sounded like one-by-fours [boards], two of them -- just bam! -- went together," Loenneke said. "He come up off that grating there about a foot."

CNN sought out these critical witnesses and others with pained memories and personal knowledge to tell the story in their own words, rather than depend on official reconstructions of the murder case.

Among those interviewed: five policemen on the scene or on duty that day, three men in the firehouse, two of the garbage workers whose city-wide strike brought the civil rights leader to Memphis, the medical examiner who plotted the trajectory of the fatal bullet, and the former Ku Klux Klan lawyer who became James Earl Ray's first attorney.

Ray's younger brother, Jerry, shared his story of how he stayed in touch with James during the prison escapee's year on the run and was at his bedside when Ray died almost 30 years after his guilty plea in King's death.

The documentary draws on James Earl Ray's personal hand-written account at the time, which describes how he purchased his white Mustang and the .30-06 rifle left at the murder scene, as well as his capture overseas while trying to join up with mercenary forces in white-ruled areas of Africa.

The former Lorraine Motel is now the National Civil Rights Museum in Memphis, and its president, Beverly Robertson, allowed CNN unprecedented access not only to the second-floor balcony where King was killed, but also to the museum's remarkable display of the evidence, including Ray's rifle and his prison radio, both left behind as he drove away.

CNN was able to obtain transcripts of original police interviews with many witnesses now deceased, including boarders in the rooming house where authorities believe the fatal shot was fired. The network also got access to FBI interviews with the owners of the gun store where Ray bought the rifle, and we talked face-to-face with each of them, although both declined to be interviewed on camera.

Our team read the full report of the House Assassination Committee, which held extensive hearings in 1978, as well as two Justice Department reports defending the FBI findings, but we avoided using any of the official government accounts, other than original documents found in the British Archives on the U.S. request for Ray's extradition after his arrest.

CNN's goal: to bring you as close to a first-hand eyewitness account of those turbulent times and that tragic ending as can be possible 40 years after the death of a leader many consider an American martyr.